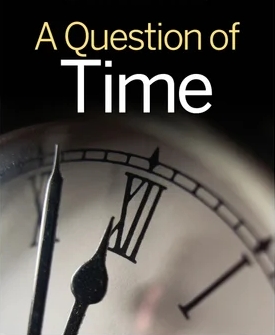 Many years ago, my parents gave me a projection alarm clock -- which projects the time on the ceiling or wall so that I could simply open my eyes in bed and see what time it is. "Cool invention," I thought, and it woke me up for years. Move the clock forward many years and I was in need of a new projection clock, which my wife thoughtfully purchased last week. I set the clock alarm to go off at 6:15 a.m., directed the projection on the wall, and went to sleep.

As I was in a deep slumber, the alarm went off and I tried to turn it off -- but clearly was hitting the wrong buttons. I had the entire clock flashing with the wrong time, making our bedroom look like a disco studio! Suffice it to say, I unplugged the clock in the dark... trying to allow Kelley to sleep a little longer as I got ready for the work day. I was very tired as I slowly walked downstairs to turn on the living room light, check the heat setting, and say good morning to our two cats -- which were curled up and looking at me as though I was disturbing them. As I was about to go back upstairs, I glanced outside and was impressed that the decorative solar lights we had placed along the bushes at the front of our house were still bright, thinking that we purchased good ones that can really hold a charge.

I wandered upstairs, being quiet to not wake Kelley or my stepdaughters. I went into the bathroom to shave and shower when I glanced at the clock on the wall, which read 12:05 A.M.! WHAT?! How in the world could it only be midnight? I checked my cell phone and sure enough... it was midnight! No wonder the solar lights were still shining so brightly, and that the cats were not of their usual excitement to see me in the morning. As it turns out, the new alarm clock has actually two alarm settings, and although I had set the first alarm to go off at 6:15 a.m., I had somehow activated the second alarm setting, which was defaulted to 12:00 a.m.

I went back downstairs and said goodnight (again) to our cats, shutting off the living room light. I crawled back into bed and set the alarm on my cell phone. I'll have to get the knack of our new projection alarm clock! Like the average person, I sleep nearly 3,000 hours per year (8 hours per night), or 121 days. Since one-third of my year is spent asleep, I want to make sure that I'm not getting up needlessly to do my 6 a.m. routine at midnight!

Finally, sleep researchers have found that 85 percent of people use an alarm clock to wake for work. A little more than one third (35 percent) of women and 43 percent of men say they never hit snooze, with the rest admitting to hitting snooze at least once.