Was I a "World Class" Runner and Didn't Know It? 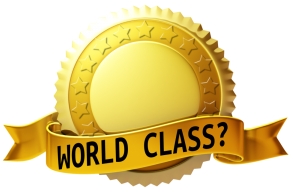 By definition, to be "world class" refers to someone with a skill or attribute that puts him or her in the highest class in the world. Essentially, it means that the person ranks among the best of people for a particular skill or ability.

In the book "Outliers," Malcolm Gladwell popularized the notion that to become an expert in a field requires putting in 10,000 hours of practice (or approximately 10 years). Olympian Jeff Galloway, who ran the 10,000 meters in the 1972 Olympics, wrote an article on what it takes to become a "world class" runner. He shared just a few elements of what it takes, such as training seven days per week and being committed to running 10 hours every week (or 520 hours per year). At that pace, it would take about 20 years before a person became an 'expert' in running. However, there is far more than just time that goes into becoming "world class." There is also the mental focus, the persistent drive to improve, and a relentless spirit to keep pursuing the goal. My running between 2005 and 2011 definitely met that criteria -- not to mention the 30 years of running that I did leading up to that point.

When I was 21 years old, I was sponsored by an array of companies for my long-distance running, including such well-known names as New Balance; Gatorade; Duracell; and, Oakley eye wear. In the late 1980's, I stepped away from being a sponsored runner and decided to run without any company sponsorships. When I ran across America in 2006 at the age of 41, I had only one corporate sponsor -- B.O.B. Gear (which provided a jogging stroller for my solo, self-supported crossing). Of course, after that adventure I also ran solo across Montana (2008), Alaska (2009), Germany (2010), and the Mojave Desert (2011). I typically ran between 30 to 45 miles per day as I crossed states and countries, all while pushing a 70 to 100-pound jogging stroller filled with gear, food and water. So, was I actually a "world class" runner when I was doing all of those coast-to-coast and border-to-border runs?

The question came to me recently when I reviewed a search engine report for my website, www.paulstaso.com. The report showed that someone had done a search engine query for "Paul Staso World Class Athlete." I sort of chuckled when I read that because I've never considered myself "world class." I was just a guy who enjoyed solo adventure running while trying to promote youth fitness through school assemblies and a website I maintained to chronicle my endeavors. Of course, this search engine query got me wondering. I've been mentioned in books, magazines and online articles by authors, and did become the fifth person in history to ever run solo across the United States. I was also the first person to run all alone from the south rim of the Grand Canyon to Badwater Basin in Death Valley. Between 2006 and 2011 I successfully completed some big running endeavors, but did all of that qualify me for a "world class" title?

If "world class" truly refers to a person with a skill or ability that places them among the best in the world, then perhaps from 2006 to 2011 I was one of the best in the world for the type of journey running I was doing. I don't have any official designation for having been a "world class" athlete, but I can live with that. For me, I didn't do any of my running for titles or accolades. That's not what it was about. So, if I was ever "world class"... I ran into that category without ever knowing it.