While in Germany, I Was in the Crosshairs of Automatic Weapons 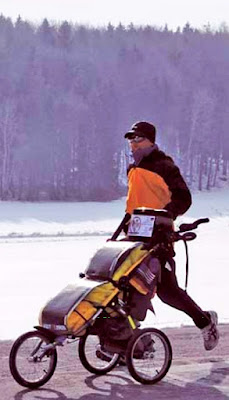 There's a story from my 2010 solo run across Germany that I've never shared before in this blog -- although some family and friends have heard the story. Today, I thought I'd share it with you. Overall, I ran 19 marathons in 21 days from Grafenwoehr, a small town in eastern Bavaria, to Landstuhl, Germany, on the north-western edge of the Palatinate forest. Over 22,000 school children from 9 countries virtually ran with me, logging miles at their schools and tracking my progress through an online website that I maintained. I must admit, I had a couple of close calls on that run!

It would be on this March 2010 run through a bitter cold German countryside that I would have automatic weapons pointed at me, ready to fire.

While running alone across Germany, I was using a GPS system for identifying the best daily route. One day, in the heart of the run, my GPS directed me onto a dirt road through a forest. I had run on many dirt roads and paths through the forest landscape, so it didn't seem like anything out of the ordinary. However, on that particular day I would end up running right into the armed German military... and I barely spoke their language!

As I ran down the dirt road, I could hear gunshots. I wasn't quite sure where the shots were coming from since I was surrounded by trees and hills, which seemed to create an echo effect. The dirt road turned into a trail, which then went through a passageway of a fence (not a broken fence portion, but a purposefully created gap of about 6 feet in width). The trail then emptied onto a paved road, which I continued to follow. I knew something wasn't right when the gunshots were getting louder, and then I saw a parked military vehicle with German flags. I stopped running and was walking slowly when it dawned on me -- as buildings suddenly came into view -- that I was actually on a German military base. 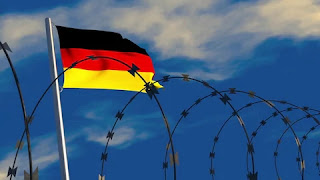 Chain link fencing with barbwire appeared on one side of the road, and about one-quarter mile ahead of me was a shooting range. Right when I was about to turn around, two men armed with automatic weapons yelled something at me. I couldn't understand them and was barely walking when they started to come toward me from about 70 yards away. The man in the lead raised his gun and locked me in his sights as he marched toward me, and then the man behind did the same. I stopped in my tracks and was pretty terrified at the situation. As they were approaching, three soldiers appeared on the roadway in front of me, only one of them able to speak a slight amount of English. I asked for the weapons to please be lowered, and although one of the soldiers on the road appeared to understand my request, the guns stayed pointed at me. The two men stood about 50 feet away with me in their sights while the three other soldiers surrounded me.

I showed them my GPS coordinates and tried to explain that I accidentally wandered onto the base from a dirt trail. They looked over my stroller and read a card I had explaining the mission of the run -- which was written in German. I was told that I was on a military base and very close to their shooting range and that I would be escorted out. There was actually very little conversation due to lack of language understanding on both sides. The two men lowered their automatic weapons and the soldiers lead me off of the base, directing me to run down a particular road -- which I did quickly. However, the altered route added 10 additional miles to my day. Regardless, I was safe and wasn't detained for further questioning. It was indeed a very nerve wracking situation and I was fortunate to be released.

Afterward, I couldn't help but to think of my grandfather, who passed away many years before my 2010 Germany run. He had fought in Germany during World War II as a sergeant in the U.S. Army. He was shot while serving for his country and was awarded the Purple Heart. He and I share our first and middle names, as well as both having military guns pointed at us in Germany. However, his encounter was for service to his country and he paid a great price. Mine was simply out of following a GPS line on a screen which lead me into an unfortunate situation.