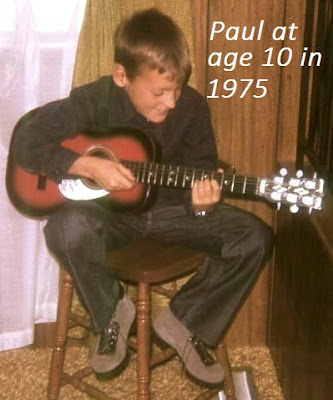 When I was 10 years of age, in 1975, my parents gave me my first guitar. At that time, John Denver was soaring in popularity and was the musical artist I listened to the most. In fact, his music was the first that I learned to play on guitar.

I'm self taught, never having taken guitar lessons. As a boy, I would sit in my bedroom and listen to the radio, trying to play along with the songs I heard while studying a piece of paper that had basic guitar chords written on it. I literally learned the guitar by ear, listening to notes in songs and working at identifying which notes they were and then trying to recreate the sound on my guitar. That was 44 years ago. Since then, I've played my guitar at church, for weddings, and other events -- but have still not taken any guitar lessons. In fact, last year I enjoyed playing a 12-string guitar at my own wedding.

When I was a senior in high school, I was in a 'garage band' called Tempest. I and three other guys made our best attempt at playing some popular songs of the time (1982-1983). Once we graduated, we went our separate ways and the sounds of Tempest were silenced forever. Since then, I've played guitar with two other 'bands' -- as a part of a small group of musicians who played weekly at a college Christian gathering (mid-1980's), and on a church worship team for many years in the 1990's. Currently, two of my children are teaching themselves how to play the guitar... my 21-year-old son, Kyler, and my 25-year-old daughter, Jenna. It's wonderful to know that they're working toward learning the guitar. 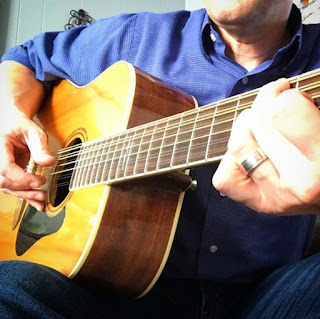 Did you know that there are only two guitar chords needed to play Bruce Springsteen's song "Born In The U.S.A.?" Yep, that's it. Two chords... repeated throughout the song. However, Springsteen is not the only musician with a two-chord song. Other artists have released songs that only require two chords to play, such as Billy Ray Cyrus' Achy Breaky Heart; The Beatles' Eleanor Rigby; and, Fleetwood Mac's Dreams. So, those who think that they can't teach themselves how to play the guitar are wrong! Learn some basic chords and strum out some tunes!

This past weekend, I had the honor of playing my 12-string acoustic guitar during a mother's day luncheon. The greatest honor was playing several songs that my eldest step-daughter, Rachel, sang at the event. She has a beautiful voice and it was an occasion I will always remember.

According to the National Association of Music Merchants, about 2.5 million guitars (electric and acoustic) are sold annually in the United States. Guitar sales are expected to stay on the upswing for at least the next few years. If you're interested in learning the guitar, pick yourself up one that is affordable for a beginner, around the $100 to $150 range. The 12-string guitar I currently play is priced at $450. I was in a music store a few years ago and had an opportunity to play a $5,000 guitar. Let me tell you, I really couldn't hear much difference in the sound of it compared to my $450 guitar. Higher cost doesn't necessarily equate to higher quality. The real 'cost' is in how willing you are to spend the time needed to learn the instrument well. If you put in the time, you can make even a $20 thrift store guitar sound great!