I Was Kissed By An Asian Man I Didn't Know... On a Montana Mountain! 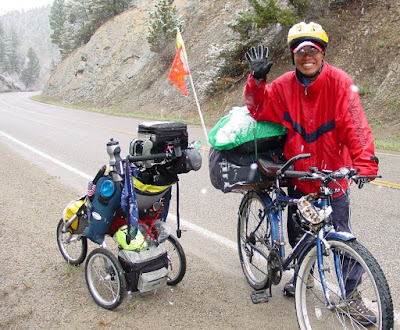 In May 2008, I was in the Helena National Forest on a 42-mile running day from White Sulphur Springs to Townsend, Montana in 28 degree temps, steady winds, and snow starting to fall when I met "Henry," who was cycling alone from Seattle to Boston. I was running 620 miles east-to-west across Montana in 20 days and Henry was crossing the country to "see America." I'm not quite sure which Asian country Henry was from, but I could tell by the smile on his face that he loved seeing America and meeting Americans.

When Henry first saw me coming down a mountain road, he couldn't believe it. He stopped and asked me what I was doing. I explained to him that I was running alone across the state of Montana as students around the world watched my progress via my website online, and that they were virtually running along with me by logging miles at their schools. Henry was fascinated by my story. As we talked, I asked him where he had slept the night before (which was a cold night that got down to 20 degrees). He said that he slept in his tent in a campground... alone. He really didn't have much gear with him aside from a bulky tent and sleeping bag, so I asked him if he had food. He said that he had run out. I asked him when he last ate, and he told me that he hadn't eaten since around 3pm the prior day. I reached into my support stroller and pulled out some granola bars and Gatorade for him. He looked at me somewhat concerned, and then started digging into his bag. I asked him what he was doing and he said that he couldn't accept anything from me unless he gave me something in return -- a custom where he comes from. I told him it was okay and that he didn't have to give me anything. Henry insisted, and kept digging through his few belongings. He then looked at me and said, "I have nothing to give, so I can't accept your gift." I could tell that Henry was serious, because his smile fell from his face.

Just then, Henry's face lit up. His smile returned and he said, "Wait! There IS something I can give you." I asked him what that was. He said, "I'll give you a kiss!" As you can likely guess, I was rather surprised by his reply. Imagine, two guys on a winding mountain road in Montana all alone in cold temps and falling snow... and one wants to kiss the other. I really didn't know what to say. Henry had a smile from ear to ear as he moved closer to me. I had the granola bars and Gatorade in my hands and turned my right cheek to Henry as he planted a big kiss. He held it there for a second, and then took a step back. I looked at him and he was as happy as a fella could be. I gave him the food and he put it into his bag. I then wished him well on his trip and took off down the road in the opposite direction. I don't know if Henry ever made it all the way across America, but I'm sure that he shared that broad smile with everyone he met... and perhaps an occasional kiss!