Watermelon and Hamburger Buns -- Can Those Become A Sandwich? 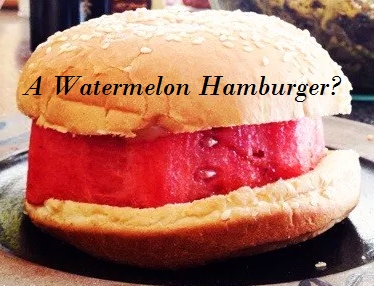 If you've done any airline travel, you know that most airlines have a 50-pound limit on a piece of luggage. If you're like me, you've weighed your luggage before going to the airport in order to get it as close to 50 pounds as you can. Of course, that's a lot of weight to travel with. Now, imagine 75 pounds... and rather than flying across the country you have to push that weight every step of the way. That's exactly what I experienced on my solo run across America in 2006. Everything I needed (food, water, clothes, tent, sleeping bag, electronics, etc.) to be self sufficient on that 3,260-mile, 108-day journey across 15 states was packed into a three-wheel jogging stroller. At the time, I weighed about 145 pounds, so pushing something over half of my body weight, across all sorts of terrain, and through the second hottest summer recorded in America -- at that time -- was certainly a challenge.

During my coast-to-coast run, there were numerous people who wanted to be supportive by pulling over to the side of the road and handing me something to eat or drink. However, there were two individuals -- on two separate occasions -- that I will never forget.

The first was in Minnesota when I was nearly halfway across the country. A man had been sitting in his car alongside the road waiting for me to arrive. As I approached, he got out and announced that he had read about me in the local newspaper. He was holding a plastic bag in one hand as he reached out the other to shake my hand. He was very enthusiastic about my undertaking and told me that he brought me lunch. It was a kind gesture and as I received the bag from him my immediate thought was "Wow, this is light!" When I looked inside I saw a store-bought bag of hamburger buns... and nothing else. I smiled and said, "Oh, hamburger buns." The man was grinning from ear to ear and said, "Yep, carbos! I know you runners like those." While he was correct that carbohydrates are good for runners, I was puzzled as to why he thought a bag of hamburger buns would constitute "lunch." Rather than question him, I accepted his gift, shook hands again, and headed down the road -- hoping to come across someone with hamburger meat and a grill!

When I was in Iowa I was battling gravel shoulders at the road's edge and dealing with a lot of hills. The stroller was a challenge through Iowa and any unnecessary weight was absolutely not wanted. It was then that I would come across another man, who wanted to give me something much heavier than some hamburger buns. I was pushing up a hill when I saw a man appear near the top. He was holding something with both arms and was clearly waiting for me to reach him. As I got closer I could tell that it was a large watermelon -- at least 15+ pounds. As I came to a stop, he approached my stroller with a "Howdy" and then started to set the watermelon on top of it, saying "I brought you something to eat." I quickly had to tell the man that it was too big and that I couldn't carry an entire large watermelon on top of the stroller... that it was simply too much weight. I asked him if he could cut some off, and he told me (a bit exasperated) "I don't have a knife!" I thanked him for his kind gesture, but had to decline due to the size and weight of it. He wished me well and walked back to his truck with the watermelon... seeming rather disappointed.

I will always be grateful for the tremendous amount of encouragement and support I received while running across America, as well as the other state/country journey runs I did. Whether it's an offer of hamburger buns or a huge watermelon, the kindness behind the offer is what will always stick with me.