I've Had Moose Encounters, But One Moment Was Particularly Special 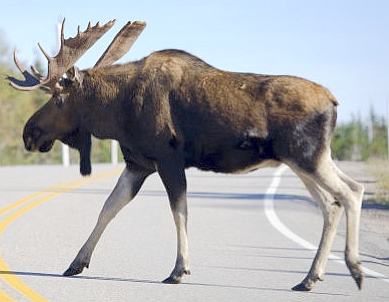 It was ten years ago this spring that I did a 500-mile run through Alaska. While on that journey, I had one of the closest encounters with a moose that I've ever had in my life. I say "one of the closest" because as a teen growing up in Alaska I had a few encounters with moose -- such as walking to the school bus and having a group of moose chewing on low-hanging willow branches about 50 yards from where I and other students stood waiting; and, coming over a cross country ski hill only to find that a moose was halfway in the path and as I skied by I brushed his backside; and, a time when I was running cross country in high school and all of the competitors were brought to a standstill as a large moose stood directly on the path. The encounter I had in Alaska back in 2009 was quite sudden, and quite magnificent.

I was running between Wasilla and Willow, Alaska, and was actually on a walk break, drinking some water. All of a sudden I heard a rustling across the roadway... which sloped down into a valley. A huge bull moose came up out of the brush and stood on the edge of the road directly across from me. There were literally two open lanes between us and nothing more. It was morning and hovering around the freezing mark. I could see the steam of his breath and heard each exhale. He stood there staring at me and my yellow support stroller of gear. I wanted to grab my camera, but was absolutely frozen as I looked at the size and obvious strength of the huge bull moose. His rack was enormous and he could have killed me instantly if he wanted to. After about 30 to 60 seconds of just staring at each other, a car could be heard in the distance... approaching. The moose turned his head and simply strolled back into the brush. I started walking, keeping my eye on where he had gone back into the wilderness. My heart was pumping as though I had just ran a sprint! It was an incredible experience.