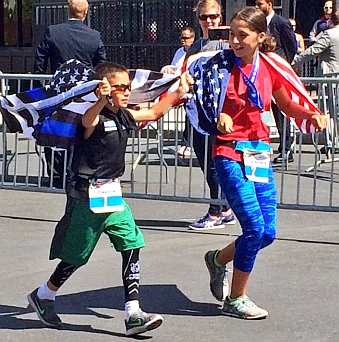 A sister and brother in La Puente, California, are competing to set world records by running marathons around the world. Blanca Ramirez, age 16, and her 9-year-old brother Jordan have traveled to all seven continents in their quest, and Blanca already has one record under her belt. At age 12, Blanca became the world's youngest female to run seven marathons on seven continents. Now, she's looking to become the youngest to complete the feat twice!

Jordan has been following in her footsteps. In November 2017, he completed his first marathon in Australia at age 8. After Australia, he ran a marathon in Egypt to cross Africa off of his list. Then he went to Europe, where he ran another 26.2 miles in London. His fourth marathon in Thailand crossed Asia off the list, and he'll head to Antarctica and South America next. Jordan plans to finish his world record attempt on American soil in April. Although Blanca has already run on every continent, she decided to do it again to run alongside her little brother. The 16-year-old plans to complete her second world record at the Los Angeles Marathon in March.