The People You Meet... While on Your Feet... Out on The Street 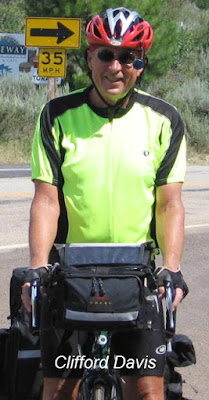 The other day, I was thinking about a man I met while on my solo run across America in 2006. His name is Clifford Davis of Columbus, Ohio and he and I crossed paths on a road in northern Idaho as he was cycling 4,300-miles solo across America. Clifford had just retired and was 66 years of age (I was 41 years old at the time). Having loved cycling all of his life, he decided to begin his retirement years with a cross country adventure. I know that he completed that journey and called it a "trip of a lifetime." You can read Clifford's daily journal from that 77-day trip, and see his photos.

When I met Clifford, he was on day 14 of his west-to-east journey, a day that would be 60 miles from Lowell to Powell, Idaho. As I chatted with him alongside the Lochsa River on the morning of July 16, 2006, he told me how impressed he was with my attempt to run alone across America just to keep a promise to some elementary students. Both of us had already journeyed over 600 miles on our respective adventures, and as I saw Clifford ride off around the next bend in the road I knew that I would encounter many people like him. I also recall thinking to myself... 'Wow, that guy is 25 years older than me and he's out here tackling a journey across the country alone. Cool!' Clifford and I didn't keep in touch, but I do know from a little online research that in 2008 he also rode his bicycle 804 miles over the route of the Underground Railroad from Mobile, Alabama to Henderson, Kentucky. 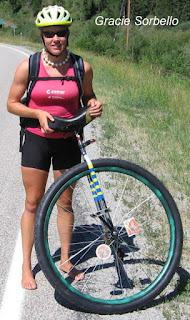 It was just a couple of days after I met Clifford that I would meet Gracie (Sorbello) Cole, a young lady who was nearing the end of an east-to-west cross country adventure on a unicycle! She became the first woman to unicycle across America, and her strength and determination was truly inspiring to me. She and I still keep in touch via social media.

When you set out on an adventure, you never know who you're going to meet. I believe that was one of my most favorite elements of the adventure runs I did across states and countries. You meet all sorts of people... some on their own personal adventure or quest, and others who are just wandering with no particular goal or direction.

I always made time for anyone who stopped me to talk. Those chats lasted anywhere from a few minutes up to about 30 minutes. Some people just wanted a photo or a handshake, while others wanted to know a lot of details. Some hugged me, some prayed for me, and some brought me food and water. Nearly every day I met people on the road... some were adventurers, some were hitchhiking, some were homeless, and some were just wanting to meet me after seeing me on television news or in their local paper. Keep in mind, my 2006 run across America was before the days of social media. I really didn't get much press coverage and if somebody met me and took my photo on the edge of the road, it couldn't be posted to the social media platforms that are in our world today. My encounters with people were brief and not publicized to the rest of the world. In a way, that made my run more personal.

Clifford and Gracie were just two of countless individuals I met while on my adventure runs across America, Germany, Alaska, Montana, and the Mojave Desert. They were an encouragement to me, as were so many others, and I will always look back with fond memories of my brief road-side encounters with them.