Singapore is Helping to Keep Their Disabled and Elderly Safe 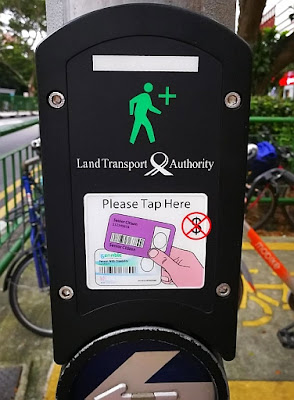 According to newly-released estimates by the Governors Highway Safety Association, the number of pedestrian deaths in the United States has reached a 28-year high. The report determined that 6,227 pedestrians were killed in motor vehicle crashes in 2018, a 4 percent increase over 2017 and the highest mortality rate since 1990. Arizona, California, Florida, Georgia and Texas accounted for almost half (46 percent) of all deaths.

In Singapore, an initiative is underway by the Land Transport Authority to help increase the safety of two categories of pedestrians -- the disabled and elderly. As pedestrians, they can use identification cards to lengthen the time that traffic lights give them to reach the other side of the street. I think this is a great idea and one that other countries should consider implementing.

Disabled citizens use a white card and the elderly use a purple card. Here are the differences:

Elderly Card: The purple card isn't an identity card, it's a concession version of the public transport fare card system (called EZ-Link, used on buses and trains, and some ATM-type facilities also accept them). Senior citizens apply for them, which gets them subsidized fares. The "no $" in the photo is to indicate that it doesn't deduct any fare value to use the pedestrian crossing in such a manner, because that's how the card is used to pay fares on public transport. You just wave it in front of the reader at a crosswalk like a cashless card transaction.

Disabled Card: The white card is indeed a form of ID, called a DDR (Developmental Disability Registry) ID. The DDR is managed by the National Council of Social Service. It's available to vulnerable groups like special needs children, persons with disabilities, and people suffering from mental health issues. It can also be used for public transport concession.

Essentially, these two types of cards extend the time for crossing at junctions that have such readers.

In the United States, 27 percent of pedestrian fatalities (and 42 percent of bicyclist fatalities) occur at intersections. I've seen many disabled people and elderly needing more time to cross a street than a crossing signal typically gives. Singapore's technology is something that should seriously be considered, particularly in areas where there is a significant number of elderly.