What Happens During One Hour of Riding Your Bicycle? 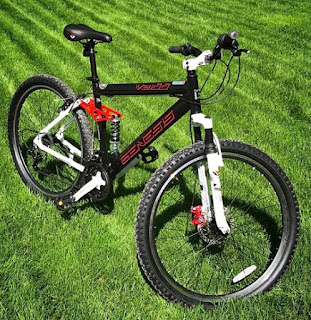 My wife recently gave me a new bike (see photo) for cruising around the neighborhood with she and my two youngest stepdaughters -- ages 11 and 14, and for short jaunts on the nearby American Discovery Trail.

Biking is an aerobic exercise that can help improve oxygen intake. Aerobic exercises can also provide cardiovascular benefits. I recently read the following online about the benefits that come from a one-hour bike ride:
The exact amount of calories you burn during one hour of biking depends on your starting weight. The more you weigh, the greater the number of calories you expend. A person who weighs 160 pounds will burn about 288 calories in one hour of cycling at a leisurely pace. Mountain biking is more strenuous because of off-road trails and hills. A 160-pound person burns about 614 calories during one hour of mountain biking.

Those of you who know my background are aware that for most of the past 45 years I've been a runner... pounding my body into the ground to the equivalent of a couple of laps of the planet. Bicycling was always my 'supplemental' exercise. However, since retiring from the ultra-running world nearly three years ago, I've aimed to get more into cycling. There are definitely benefits to be found in bicycling rather than running. Running is weight bearing – and therefore injury rates are higher. Cycling, by contrast, is not weight bearing. When scientists compared long distance runners and cyclists, they found the runners suffered up to 144 percent more muscle damage, 256 percent more inflammation, and their delayed onset muscle soreness (the pain and stiffness felt in muscles several hours to days after unaccustomed or strenuous exercise) was 87 percent higher. However, the lack of weight bearing also means that cycling does not do as much to increase bone density as other sports – so as a cyclist it’s a good idea to add a little strength training into your program.