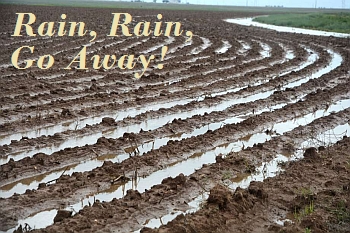 "Rain Rain Go Away" is a nursery rhyme most of us are familiar with. It dates back to at least the 17th century and has been used in songs by a number of artists. For today's U.S. farmers, it's a rhyme that is being said almost daily since the moisture level is at the 99th percentile in 85 percent of the growing areas of the Midwest.

Ongoing rain is causing planting difficulties for many farmers, because if you plant corn in saturated soil the chances of having a good crop decrease significantly. Working conditions in Illinois fields have only been suitable for about a day and a half this month in many areas. The latest Illinois Crop Progress and Condition report shows only 35 percent of the state’s corn and nearly 15 percent of soybeans have been planted as of May 26. Last year, corn was at 99 percent and soybeans were at 89 percent at this point.

During May 2019, Iowa has experienced the lowest percentage of corn planted in 24 years -- all due to consistent rainy conditions. Ohio has recently seen corn planting levels at a mere 9 percent versus 69 percent this time last year. Farmers in central Indiana are experiencing what they call the worst planting season in history. The latest crop progress report released by the United States Department of Agriculture shows only 22% of corn has been planted in Indiana, compared to 94% this time last year. In addition, only 11% of soybeans have been planted, compared to 85% this time last year.

Consumers will start to feel the financial result of all the rain. According to Bloomberg data, corn recently traded around $4.12 per bushel, surpassing last year's peak around $4.06. Prices haven't been this high since June 2016. However, some analysts say they could get higher -- to as much as $5.00 per bushel.

I live in America's "Corn Belt" region and I pray that the rain will go away... and come again another day when it's truly needed.