29 Percent of Americans Wish That They Could Travel Through Time 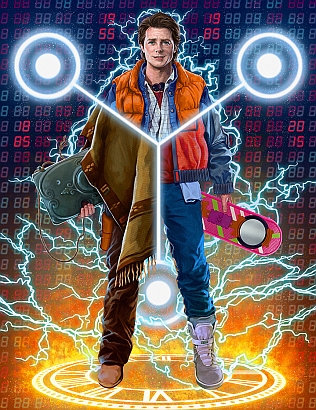 My wife and I recently introduced my two youngest step-daughters, ages 11 and 14, to the Back to the Future trilogy created in the 1980's. The Back to the Future movies have always been my favorite. For those of you who are not familiar with the trilogy, in Part I teenager Marty McFly time travels back to the 1950's when an experiment by his scientist friend, Doc Brown, goes wrong. Traveling through time in a modified DeLorean car, Marty encounters his parents when they were teenagers. Part II follows Marty and Doc as they travel into the future to the year 2015, as well as into an alternative 1985, and finally into 1955 where Marty must repair the future while avoiding his past self from the original film. Part III concludes the story, following Marty as he travels back to 1885 to rescue Doc, who is stranded in the Old West.

A few years ago, CBS News did a poll about time travel. That poll revealed that if given 24 hours to try to stop a historic tragedy, 53 percent of Americans would go back in time and try to prevent the 9/11 attacks. If given the chance to go back in time to witness a historic moment, 35 percent said they would most like to go back to July 20, 1969, and witness Apollo 11 land Neil Armstrong and Buzz Aldrin on the moon.

Another poll found that 29 percent of all Americans wish that they could travel through time, and one in ten Americans wish they had their own time machine. That same survey found that people under the age of 50 are much more into the idea of time travel than those who are over 50 years of age. The idea of traveling through time has been made popular for decades by such shows as Dr. Who; Quantum Leap; Outlander; and others.

Interestingly, many time-traveling wannabees tend to say that they would go back in time and give advice to their younger self. Of course, the lesson in most time-travel stories is that the smallest changes yield unpredictable consequences -- sometimes making things in the present worse than they are. Even if time travel were possible, adapting to the future is easier than messing around with the past.

As Doc Brown told Marty McFly at the end of the Back to the Future trilogy, "Your future is whatever you make it, so make it a good one!"

Email ThisBlogThis!Share to TwitterShare to FacebookShare to Pinterest
Labels: Back To The Future Movie, Back to the Future Trilogy, Can People Travel Through Time, Doc Brown, How to Time Travel, Is Time Travel Possible, Marty McFly, Time Travel Poll, Time Travel Survey, Why Time Travel
Newer Post Older Post Home