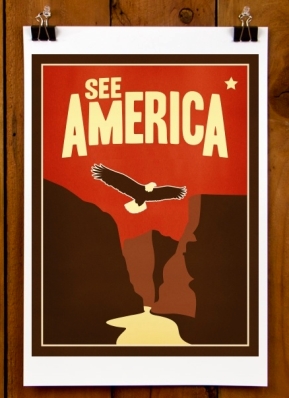 Did you know that 11 percent of American adults say they have never been to a state other than the one they were born in? According to a survey conducted by Livability and Ipsos, the average American adult has only been to 12 states (and layovers at airports don't count!). The survey showed that the most popular states to visit are Florida, California, New York, Georgia, and Nevada. I grew up in Alaska and less than 15 percent of all Americans have visited that state. What's the least visited state? North Dakota (at 10 percent). What's the most visited state? Florida (at 48 percent).

Reading these statistics made me think about the places that I've been over the past 54 years. I can tell you that I've been to 34 of the 50 U.S. states, so I'm well above the average. Also, 32 percent of Americans say they either don’t own or can’t actually remember ever buying any travel luggage. However, 76 percent want to travel more than they currently do, but a lack of finances or simply feeling unprepared prevent many from doing so.

I've stood on the edge of the Grand Canyon in Arizona. I've explored Denali National Park in Alaska. I've gazed up at towering redwood trees in California. I've watched geysers erupt in Yellowstone National Park. I've been on the Las Vegas Strip; the Golden Gate Bridge; Main Street of Disneyland; and, inside the White House. I've been fortunate to see many amazing sights within the 34 states I've visited in my lifetime. Yet, about 54% of all American adults have visited 12 or fewer U.S. states. It's a wonderfully diverse country. Make it a priority to get out there and see it.