Hour Ahead? Hour Back? Lock The Clock? It's Literally About Time! 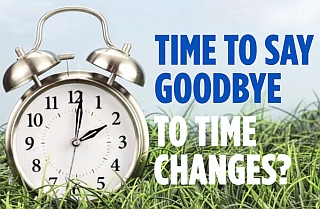 I've noticed that when my alarm goes off at 6:15 a.m. it's a bit darker outside. We're two months past the summer solstice and I'm now rising before the sun does. Daylight savings ends on November 3 and we'll once again set our clocks back one hour.

Daylight saving time began during World War I, when Germany, Britain and other countries implemented it to conserve energy for the war. The United States followed suit in 1918. After the first World War ended, daylight time was officially repealed in America, but continued to be used in some parts of the country. It was then implemented year-round during World War II, and repealed again after that war ended. However, by that point, many Americans had begun to like daylight time. As a result, some entire states enacted it, while elsewhere, individual cities opted in. Eventually (in 1966) Congress passed the Uniform Time Act — requiring daylight saving time, if followed, to be in effect statewide.

NBC News recently reported that there are studies showing that in the days after the U.S. springs forward in March, Americans face a slightly greater risk of heart attack and stroke. Also, there are more car crashes and workplace accidents. Now, there are a growing number of activists trying to have daylight savings done away with permanently.

It’s a movement that is gaining momentum. Just this year, at least 36 states have introduced legislation to end daylight savings or to do studies on the effect of it, more than any year before. Some bills call for all-year standard time, but most endorse permanent daylight saving time — which would result in an extra hour of evening sunlight for more of the year in exchange for a delayed sunrise in the winter.

Currently, Arizona and Hawaii are the only states that do not observe daylight saving time. Legislation to go on year-round daylight saving time has passed in at least seven states, according to the National Conference of State Legislatures. On March 11, 2019 President Donald Trump posted on Twitter: "Making Daylight Saving Time permanent is O.K. with me!"