Christmas... By The Numbers. 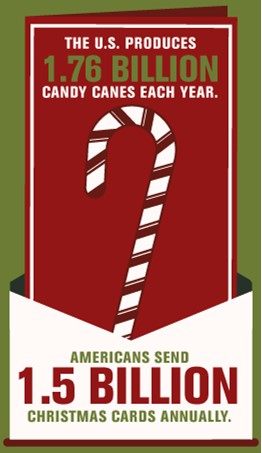 Christmas is coming quickly and I'll be away from this blog for a couple of weeks as I enjoy the holiday with my family. As I've been buttoning up projects at my office in order to be home for a five-day break, I've been thinking about all of the numbers that seem to swirl around Christmas. I know, that's an odd thing to think about, but actually the statistics of the holiday are interesting.

About 92 percent of Americans celebrate Christmas. Holiday retail sales are forecast to be over $700 billion -- which is just a fraction of the $5.5 trillion that the U.S. experiences annually in retail. The average American spends $663 on Christmas gifts. Last Christmas season, over 32 million real Christmas trees were sold in the U.S. ($78 average), as well as over 23 million fake trees ($104 average). About 79% of Americans put up a Christmas tree, and there are approximately 15,000 Christmas tree farms in the United States.

This year, Frosty The Snowman celebrates 50 years of 'running here and there, all around the square,' and Grandma Got Run Over By A Reindeer 40 years ago.

Nearly 50% of Americans see Christmas as a religious holiday. About 65 percent say Jesus was born to a virgin; 75 percent believe he was laid in a manger; and, 57 percent believe that wise men, guided by a star, brought Jesus gifts — and that an angel appeared to shepherds to announce the birth of Jesus. Unfortunately, about one-in-five Americans say that none of these things actually happened.

U.S. scientists have calculated that Santa would have to visit 822 homes a second to deliver all the world’s presents on Christmas Eve, travelling at 650 miles a second.

So, there you have it. Some numbers of the Christmas season. I wish you a wonderful Christmas with friends and family. I'm truly looking forward to all of the festivities, and the joy and laughter. In fact, you could say I'm 'counting' on it! Ho-ho-ha!