Youth Minister Slaps Reporter On Behind During Live Race Broadcast 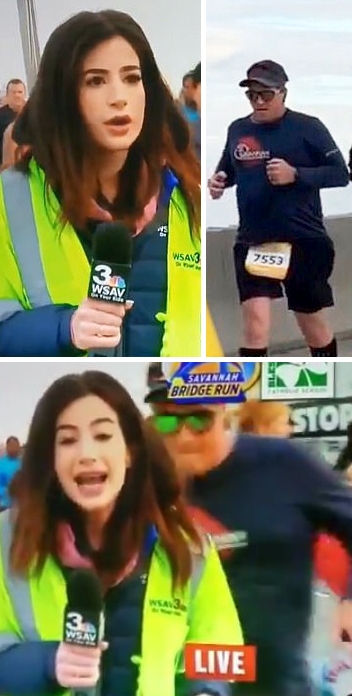 A youth minister -- who is a husband and father -- slapped a female reporter on the behind while she delivered a live broadcast during a 5km run this past weekend. Yes, you read that right. A Georgia man was seen on video running up behind reporter Alex Bozarjian of NBC's WSAV network and slapping her backside during the Enmarket Savannah Bridge Run.

Ms. Bozarjian posted the video to Twitter, with the caption: "To the man who smacked my butt on live TV this morning. You violated, objectified, and embarrassed me. No woman should EVER have to put up with this at work or anywhere!! Do better."

As part of a live segment, Ms. Bozarjian was standing next to the runners' route for the Savannah Bridge Run when the incident took place. As is clearly shown in the video, she went from cheerful and enthusiastic to visibly flustered, though she attempted to continue reporting even after the incident.

Police have been notified about the incident. The man is not facing criminal charges at this time, but many people online have have called for him to be charged with sexual assault or battery. Ultimately, the decision is up to Ms. Bozarjian as to whether or not she wants to file charges -- but she has filed a police report.

It has also been reported that the man's background includes being a Scout Leader for Boy Scouts of America. The man's name is Tommy Callaway, age 43, of Statesboro, Georgia. He has been busy shutting down his social media accounts and issued a statement through his attorney, stating that he "did not act with any criminal intentions." As one who works in the legal profession, that is precisely what an attorney would suggest be said in a statement from the wrongdoer. However, it does not change the fact or magnitude of what he did.

Suffice it to say, I am disgusted by what he did and it's unbelievable that this man has been a leader and minister to children!

UPDATE (December 17, 2019): The Savannah Georgia Police Department charged Callaway with misdemeanor sexual battery. He was released from the Chatham County jail after posting a $1,300 bond. He could face up to a year in jail if convicted.