Man Runs a Marathon in All 196 Countries of the World 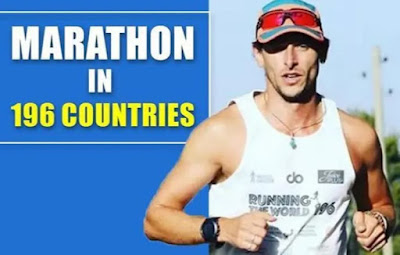 I started running during the "running boom" of the mid-1970's. In the past 40+ years I've seen a lot of unfathomable running attempts successfully accomplished. There have been people who have run just about everywhere imaginable, including completely around the world. Recently, I read about a man who succeeded at a quest that I have heard other experienced long-distance runners talk about as being an incredible undertaking. The goal had never been accomplished before, and now it appears that it has. Nick Butter, age 30, became the first person to run a marathon in all 196 countries of the world.

Over the course of 674 days his journey involved 455 flights, which were painstakingly booked by his father in the United Kingdom; 120 visas; 10 passports; and, 10 million steps of running. He completed 22 marathons with food poisoning, four with a kidney infection, 101 on an empty stomach, and managed 320 days without painkillers.

Butter gave up his job as a banker four years ago to plan and complete the record attempt, and it's not cheap to run a marathon in every country. The total bill was over $230,000 in U.S. currency. Generally, he ran two to three marathons per week. Keep in mind, often these "marathons" were not actual marathon races with other participants. Many times, it was just a matter of him running laps over and over again — such as 82 in Vatican City, 104 in the high commissioner’s compound of the British Embassy in Kingston, Jamaica, and 105 inside a stadium in the Syrian capital Damascus. The most laps that he did was in a hotel parking lot on the Pacific nation of the Marshall Islands — 335 laps.

What about accountability for the record? Well, most of Butter's marathons were run alone. His attempt to be the first person to run a marathon in every country in the world hasn’t yet been officially ratified. He has his travel tickets and recorded run routes as proof, and plans to submit the paperwork soon. The Internet is already seeing doubters of Butter's claim. Verifying that he actually ran 26.2 miles in every country of the world is certainly going to take considerable proof.

For now, he plans to embark on a public speaking tour of schools and venues around the United Kingdom and Europe. Having sold his house and bought a camper van, he hopes to recount his tales of hardship and all the lessons he learned along the way.

For his next running challenge, he's looking at an attempt to break the record for the 1,000-mile run around Iceland.