I Got Lost Twice During My 2006 Solo Run Across America 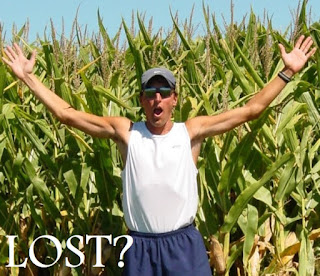 I've been asked many times if I ever got lost during my run across America in 2006. During that solo journey I primarily used paper maps to guide my way across each state, and sometimes I would find myself on very small country roads that were nothing more than an extremely thin line on my map. However, the two times that I got lost wasn't on back-country roads. Each time was actually in a city!

My third day of that 108-day adventure would have me approaching Portland, Oregon. It was Sunday, June 25, 2006 and the temperature was 103 degrees. I was in the area of Aloha, Oregon just east of Portland when I made a costly mistake in navigation resulting in a 4-mile detour. Essentially, I went in the wrong direction for two miles before realizing my mistake. Suffice it to say, that added four miles to the overall endeavor.

The other time that I got lost while crossing the country was on Thursday, October 12, 2006 - when I was just 8 days from the finish line. I was completing a 42-mile day from Romney, West Virginia to Winchester, Virginia when... well... I'll just share with you what I wrote in my journal that day:


"Some confusion arose regarding the location of the hotel. Google's new mapping software was inaccurate for my hotel's location. My cell phone battery had ran out and my satellite phone would not connect. After asking for directions I learned that I was still 2 miles from my hotel, so I started to make my way there through a 'bad' part of town. On my way, a guy approached me asking for money. I told him that I didn't have any to give and the next thing I knew he reached toward my support stroller and grabbed my satellite phone case. He then ran off. I parked the stroller on a yard and decided to chase him down. I knew that I wouldn't chase him beyond 4 to 5 blocks because I didn't want to leave the stroller unattended. After three blocks I caught up to him and knocked the satellite phone case out of his hand. I picked up the phone and made it very clear that I was not in the mood for him. After a loud and vulgar reply from him, he took off and I returned to the stroller. I then ran quickly out of there because I didn't know if he would return with friends. The sun had already set and eventually I made it to my hotel."

Now you know that during the 3,260-mile, 15-state, coast-to-coast adventure... I got lost twice. At least I didn't end up in Canada or Mexico!