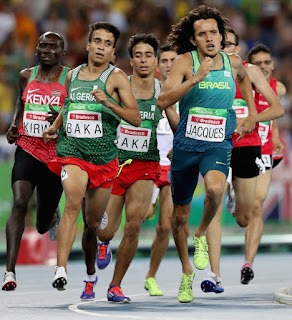 The Paralympics is an international competition for physically disabled athletes. That competition has been taking place at Maracanã Stadium in Rio de Janeiro and last weekend a race took place that resulted in an amazing accomplishment.

Unfortunately for Baka, he wasn’t racing in the Olympics. He was racing in the Paralympics, where not one or two runners finished ahead of him, but three! Baka ended up placing fourth in the men’s 1500m - T12/13 Final, a race for the visually impaired. In front of him was bronze medalist Henry Kirwa of Kenya (3:49.59), silver medalist Tamiru Demisse of Ethiopia (3:48.59) and gold medalist Abdellatif Baka, who is the brother of the fourth-place Fouad (3:48.29).