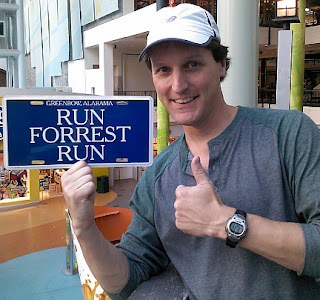 I first attempted to run across America in 1986. I was injured during the attempt and unable to complete it. In 1994 the movie Forrest Gump was released and showed Forrest running coast-to-coast across America. In 2006 I ran solo across America and had countless people yell these words to me (which are from the movie): "RUN FORREST RUN!" Everyone who yelled those words thought they were quite clever and were likely the first person to yell those words to me. If I had a dollar for every time that someone has yelled "Run Forrest Run" at me over the past decade... well, I'd be as wealthy as Forrest became in the movie.

After I ran across the United States I was contacted by over 100 people within the first year, many of them wanting to know how THEY could run across America. Some had watched the Forrest Gump movie and were inspired... going to the Internet to research runs across America and finding information about me. I've actually had a couple of people write to me and ask if the Forrest Gump movie was based on my life! Some people have a difficult time distinguishing fact from fiction.

For the record, I am not Forrest Gump and the movie was not based on anything about my life. In fact, I attempted to run across America 30 years ago -- 8 years before 'Forrest" ever did on movie screens. So, if you want to encourage me when I take on another mega-mileage ultra running adventure, just yell "RUN PAUL RUN!" I've actually only seen and heard those words used once... on a handwritten sign that was held up by a spectator who yelled "Run Paul Run" to me as I ran through Missoula, Montana during my 3,260-mile coast-to-coast run. It was nice to hear MY name instead of that of the fictional character Forrest.