"Young Man, You Have The Brain of a Scarecrow!" 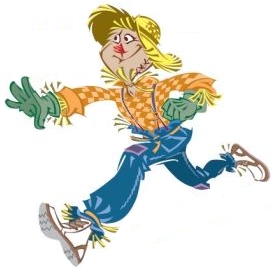 As I've done solo runs across states and countries pushing a loaded jogging stroller filled with gear, food and water, I've heard a lot of interesting comments from observers. One of the most unique came from a very unexpected person.

It was August 12, 2006 and I was about 1,300 miles into my run across America. I was on the road that morning logging 37 miles between Bowman, North Dakota and Hettinger, North Dakota when the sky opened up with a little rain. A friendly-looking elderly gentleman stopped his car slowly, rolled down his window, and asked me where I was heading. I told him that I was running across America and that Delaware was my destination. The man looked at me standing in the rain with a yellow jogging stroller, shook his head, and said: "Young man, you have the brain of a scarecrow!" He then drove off.

I continued on my way, thinking about the scarecrow from The Wonderful Wizard of Oz movie. In the beginning he was "mindless," but by the end of the movie he's viewed as very wise and the Wizard appoints the Scarecrow to rule the Emerald City. By the time I had reached the Atlantic, I too had become wise about many things. So, that elderly gentleman may have thought I was as dumb as a scarecrow, but I believe it was the journey that made me wiser than I had ever been.