Taking The Road Less Traveled -- Does It Make All The Difference? 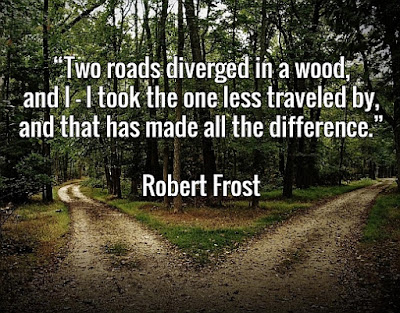 "Mountain Interval" is a collection of poems providing a wonderful selection of the work of Robert Frost. His poems are concerned with human tragedies and fears, his reaction to the complexities of life, and his ultimate acceptance of his burdens. In 1916 he published the poem titled "The Road Not Taken." I've read this poem many times over the years, usually when I'm faced with two options in life. Often we are presented with a fork in life's road and have to make a decision. I've more often been blessed by taking the one less traveled. His poem reads:


Two roads diverged in a yellow wood,
And sorry I could not travel both
And be one traveler, long I stood
And looked down one as far as I could
To where it bent in the undergrowth;

Then took the other, as just as fair,
And having perhaps the better claim,
Because it was grassy and wanted wear;
Though as for that the passing there
Had worn them really about the same,

And both that morning equally lay
In leaves no step had trodden black.
Oh, I kept the first for another day!
Yet knowing how way leads on to way,
I doubted if I should ever come back.

I shall be telling this with a sigh
Somewhere ages and ages hence:
Two roads diverged in a wood, and I --
I took the one less traveled by,
And that has made all the difference.

The poem demonstrates that we must assess the possible advantages, disadvantages and risks of taking either road. Metaphorically speaking, someone who takes 'the road less traveled' is acting independently, freeing themselves from the conformity of others (who choose to take 'the road more often traveled'), generally making their own choices, and perhaps leaving a new trail that will become the road more often traveled.

Over the past 35 years, words from Frost’s poem have appeared in nearly 2,000 news stories worldwide. In addition, “The Road Not Taken” appears as a title, subtitle, or chapter heading in more than four hundred books by authors other than Robert Frost. His poem is definitely a gem of American literature.