Have You Ever Done Streaking? 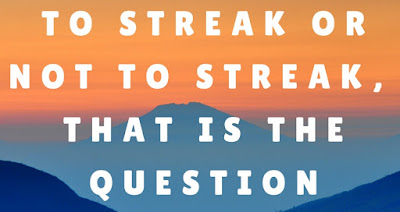 In 1974, Ray Stevens had a popular song on the radio called "The Streak." Some of the words in that song are: "Oh, yes, they call him the Streak... Fastest thing on two feet... He's just as proud as he can be..." The song is actually referring to running naked ("streaking") -- something that became a fad in the 1970's.

A "running streak" is actually when a person runs at least a mile per day EVERY DAY without missing a day. Earlier this year, the longest running streak on record ended after an amazing 52 years and 39 days. Ron Hill, age 78, a three-time Olympian for Great Britain, ended his running streak on January 29, 2017. In a statement released by Streak Runners International, Mr. Hill stated: “I have been having heart problems and have been waiting for some time now to have the problem diagnosed and hopefully rectified.”

Jon Sutherland, age 66, of West Hills, California, has the best chance to break Hill's longest streak for consecutive days running. Mr. Sutherland has run at least one mile every day for the past 47 years and 10 months.

I've never been one to try and have a running streak. When I was 30 years old back in 1995 I thought about starting to run my age in miles on each birthday. So, on my 30th birthday I ran 30 miles. It took me about 5 hours, but I decided that I didn't want to be on the road every year on my birthday. I recently turned 52 years of age, so logging a 52-mile run on my birthday would have been challenging!  Every year, Dave McGillivray, the race director of the Boston Marathon, runs his age in miles on his birthday. He first started doing it at the age of 12 and hasn't missed a year since! He'll be 63 this year, so he has quite a challenge in front of him.

To all of the running streakers and birthday age runners out there, I salute you!