The Best Sun Tan of My Life... And The Most Dangerous! 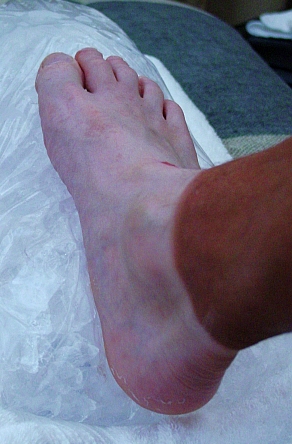 When I ran across America in 2006, I happened to do it during the second hottest summer ever recorded in the United States. As a result, I got a very good tan! This particular picture of my foot on an ice bag shows just how tanned my skin got -- particularly compared to my pale foot which was always in my running shoes. This photo was taken 1,000 miles into the journey, or after completing only one-third of the distance. Yes... I got even darker as the miles clicked by.

I've always been very thankful that I made it all the way across the country without serious injury or getting hit by a car. I'm also thankful that I didn't end up with any skin cancer as a result of the extreme daily exposure to the sun. Being on the road 8 to 10 hours per day (often when the temperature was at or near 100 degrees) literally cooked my skin at times. On the third day of the run I hit record-breaking 100-degree temperatures as I entered Portland, Oregon. The heat was relentless that summer and I applied sun block to my skin as frequently as possible. I wore a hat every moment I was on the road and never ran without at least a singlet (tank top). 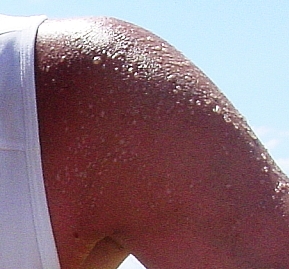 By the time I ran out of the state of Washington in July 2006, the skin on my shoulders was beginning to blister and bubble due to the extreme heat (105 degrees) and exposure. I did the run solo, so I had no vehicle to get into in order to cool down. The route I chose across Washington was along the Columbia River Gorge and there are no trees or sources of shade, and very few houses for a couple of hundred miles. At times, I felt like I was actually cooking on the surface of the pavement (particularly since asphalt can be 60 degrees HOTTER than the air temperature). My blistered shoulders hurt and made sleeping at night very difficult. As the miles clicked by, my body adapted and the blistering on my shoulders subsided. At that point, I just kept getting darker and as I ran through the Standing Rock Indian Reservation in South Dakota I nearly blended in with the locals. 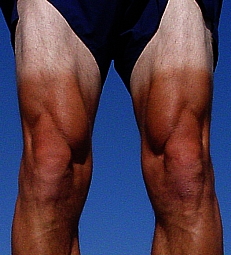 The vast majority of melanomas are caused by the sun. In fact, one UK study found that about 86 percent of melanomas can be attributed to exposure to ultraviolet (UV) radiation from the sun. Although I've done several adventure runs across states and countries, none was hotter or longer than my 3,260-mile run across America during the summer of 2006. It has been over ten years since I did that run and I'm fortunate to not have any signs of skin cancer. It's estimated that 9,730 people will die of melanoma in 2017.

Melanoma accounts for less than one percent of skin cancer cases, but the vast majority of skin cancer deaths. You may be surprised to learn that on average, a person’s risk for melanoma doubles if he or she has had more than five sunburns. Regular daily use of an SPF 15 or higher sunscreen reduces the risk of developing melanoma by 50 percent.

The hot days of summer are just around the corner. Be sure to protect your skin!