In 1980, 22-year-old Canadian Terry Fox ran nearly a marathon a day for 143 days as he attempted to run across Canada to raise money for cancer research. Cancer had taken one of his legs and he was determined to give hope to others battling cancer. Although he eventually lost his race with cancer before being able to complete his 5,300-mile trans-Canada run, he raised money and awareness... and inspired millions of people worldwide. The shoes shown below are those that Terry wore (Adidas Orions) during his run across Canada, patched with Shoe Goo. 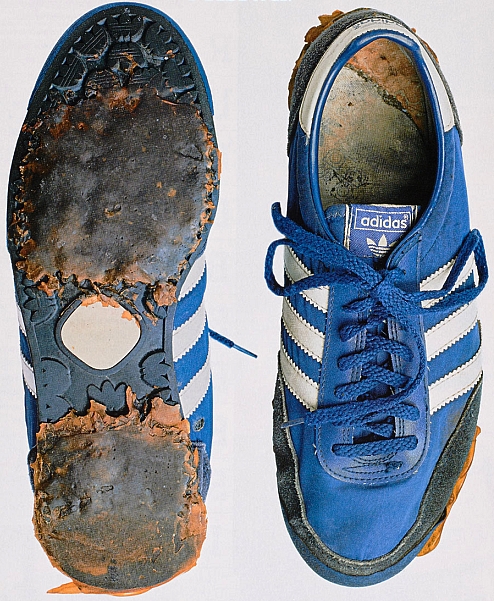 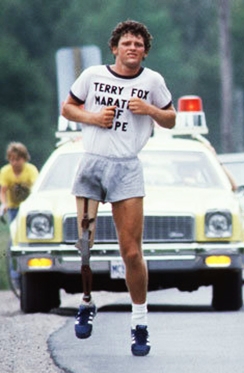 Terry completed 3,339 miles of the run across Canada. At www.terryfox.org it states:

"He changed people’s attitude towards the disabled, and he showed that while cancer had claimed his leg, his spirit was unbreakable. His "Marathon of Hope" had started as an improbable dream – two friends, one to drive the van, one to run, a ribbon of highway, and the sturdy belief that they could perform a miracle. He ran through ice storms and summer heat, against bitter winds of such velocity he couldn’t move, through fishing villages and Canada’s biggest cities. Though he shunned the notion himself, people were calling him a hero. He still saw himself as simple little Terry Fox, from Port Coquitlam, British Columbia, average in everything but determination."

I remember following Terry's progress via television and newspaper reports in 1980 -- when I was 15 years old. He was certainly an inspiration back then... and still is today!