Racing Over Hurdles in the 1800's... Wearing Snowshoes! 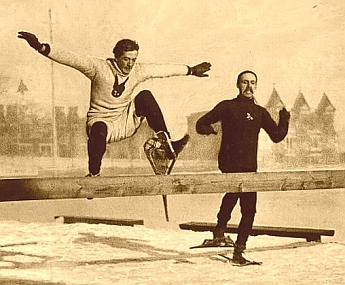 The Montreal Snow Shoe Club was founded in 1840 and organized an array of races -- including a hurdle race while wearing snowshoes!

Hurdle heights were eventually standardized at three feet (36 inches) and a formal rule was adopted in the 1878 Laws of Snow Shoe Racing that required full clearance of each hurdle. The standardization of the racing shoe to one and a half pounds with no less than ten inches of gut at the widest part was decided by a December 1871 convention of snowshoers from various Montreal clubs.

I don't believe this will ever become a winter Olympic sport!