Are You Still On Track With Your New Year's Resolutions? 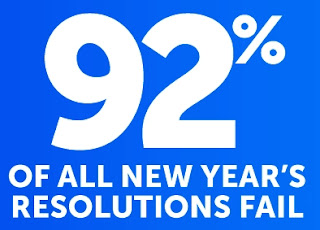 We're almost two weeks into the new year. Did you kick off the year by making any resolutions?

A survey by Statistics Brain shows that losing weight and eating healthy are the most popular resolutions of 2018. Those are followed by life improvements and better financial decisions. Apparently, more than 40% of Americans make New Year's resolutions. Statistics show that about 72 percent of people maintain their resolution through the first week of January and 68 percent of people go past two weeks. After that, 44 percent go beyond the six month mark. Also, people in their twenties are more than twice as likely to achieve their resolutions than people over the age of 50.

I'm not one to make New Year's resolutions. Never have been. I figure, if a change needs to be made it can be made any day of the year. However, I know that fitness studios love this time of year because enrollments increase and gyms are full. However, as January unfolds the numbers slowly dwindle and more available spaces can be seen in the parking lot. In fact, University of Scranton research suggests that just 8 percent of people achieve their New Year's goals.

Many people use the New Year as an opportunity to make large bucket lists or attempt extreme makeovers, whether personal or professional. That's a nice aspiration, but the average person has so many competing priorities that this type of approach is usually doomed to failure. Setting ambitious resolutions can be fun and inspiring, but the difficulty in achieving them means that your elation can quickly give way to frustration.

While it is true that simply setting a goal does significantly raise your chances of achieving that goal, many people find that within weeks or months they begin to abandon their resolutions as they hit bumps in the road that throw them off their stride. More often than not, people who fail to keep their resolutions blame their own lack of willpower. In surveys, these resolution setters say that if only they had more self-determination, they would have overcome hurdles that appeared and ultimately achieved their goals. Personally, I believe that you have as much willpower as you think you have. No more, no less.

Whether your New Year's resolutions have already gone by the wayside, or if you didn't even set any resolutions, always have goals for your life. Find a way that works for you to chart your goals. For some, making a clear to-do list is enough of a reminder; others rely on "vision boards" or personal diaries. Also, share your goals with your friends and family. It's another way to build accountability. Then, it's a matter of execution. Step out toward your goal -- believing in yourself and your ability to reach it. Remember, you only have as much willpower as you think you have. Think, step, believe, achieve!