"Do You Have Any Weapons or Drugs in That Stroller?" 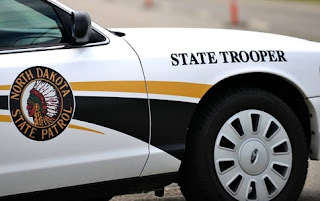 If you ever get it into your head to run solo across America pushing a yellow jogging stroller of gear, food and water... be prepared to be stopped by police along the way! I was stopped many times during my 108-day crossing in 2006, and usually the police were checking to see if I had a child in the stroller. That's no joke!

I found that most of the police officers who stopped me along the road were courteous and encouraging. However, there was a 98-degree day in the middle of nowhere that I won't forget. I was about 1,200 miles into the run and had just crossed into North Dakota after completing my crossing of Montana. If you've never been at the Montana/North Dakota border on Highway 12, I can tell you that there is NOTHING there. No houses... no trees... no shade... just the Great Plains. On August 10, 2006 I crossed into North Dakota as the thermometer was nearly at the 100-degree mark. I was running 32 miles that day and was feeling really good after completing the largest state I would cross (Montana, at 620 miles across). However, my 'good' feeling would soon be dashed by a North Dakota state police officer who apparently had little to do and who had clearly watched too many TV police shows.

Less than a mile into North Dakota -- having not seen any vehicles for an hour -- a police car could be seen coming down the road. As he approached me, he turned on his red and blue flashing lights. I stopped and the officer got out of his car and walked toward me slowly... with one hand positioned just off of the firearm on his hip. He said, "What are you doing out here?" As if the sign on the front of my stroller wasn't enough, which read "Run Across America," I told him that I was on a coast-to-coast solo run. He eyed me up and down and then asked me if I had any weapons or drugs in the stroller. I told him no, that I am an ultra-marathon runner trying to keep a promise I had made to some elementary students in Montana. I informed him that he could verify it by information on the Internet. He asked for my I.D. and then walked back to his police car, with his head turned back to keep an eye on me.

I stood there in the baking heat, drinking some water as the sweat dripped down my face. After several minutes he emerged from his air-conditioned transport and said, "You're clean." He told me to make sure I obey the laws of North Dakota and then strolled back to his vehicle. He drove off without any other acknowledgment. He was definitely "all business" and his car ended up being the only one I would see for several more miles.

Maybe he thought I was a drug runner (literally) and that I was trying to disguise my drug smuggling by posing as a guy running across the country. I ran on... sipping some Gatorade -- my 'drug' of choice.