Running Across America... and Experiencing a Hallucination! 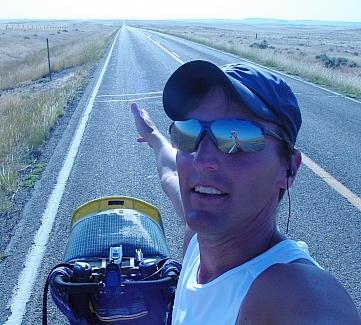 A hallucination is defined as an experience involving the apparent perception of something not present. There is only one time in my life when I've experienced a hallucination, and it was on August 2, 2006. On that particular day, I was doing a 40-mile run in 90º heat on Highway 12 in eastern Montana during my coast-to-coast solo run across America. To say that this portion of eastern Montana is flat, barren and dry would be making this section of Montana sound too glamorous!

Since it was the second hottest summer on record in America, cattle were dying and streams were dried up. Heat radiated off of the pavement, making the road shimmer in the hot sun. I had run for countless miles without seeing anyone, without seeing any man-made structures, and without seeing any trees. In fact, I would run for two hours without seeing one car. However, there was a gentleman who stopped that day and handed me some carrots and a bottle of water, just to show his support. Encounters like that were very rare in eastern Montana.

I was nearly 1,000 miles into my 3,260-mile run across the country when on that very hot day in early August I saw something I had been craving to see in that barren countryside. I saw a grove of trees just off of the roadway to my left... up in the distance. I figured the trees were about a mile ahead, and I was determined to get there and to rest in some shade. I put my head down and pushed my support stroller with determination as the sweat dripped down my face -- my running cap completely soaked and salty from my perspiration. I ran for a few minutes, nearly mesmerized by the white line on the road's edge that I was following, and then looked up to see that the grove of trees was no closer!

My reasoning at the time was that the trees must be farther away than I had thought, and that I may be moving slowly due to how fatigued I was feeling. I put my head down and pressed on. I remember looking up again and seeing nothing but barren, dry land. There were no trees in sight! I looked behind me, thinking that perhaps I had run past them while not paying attention. No... there were no trees anywhere in sight. I immediately became scared! What had happened?! I knew that something had happened mentally and it truly shook me to the core. I stopped right there and took out a tarp I had on the stroller to make a lean-to in order to 'create' shade. I sat next to the stroller under my makeshift lean-to in order to pull myself together. I drank water and ate a PowerBar. I laid down on a thin mat that I had and tried to relax. No cars came along as I was laying there and all I could hear were grasshoppers in the weeds next to me. There was no wind... no sign of life... nothing -- but intense heat.

After about 20 minutes, I got up on my feet and continued on. I never had an experience like that again. If you read my online journal about the run across America, you will not see mention of this hallucination in the entry for August 2, 2006. The reason is that I didn't want to alarm my family and friends who were following my progress each day. However, the moment is forever etched into my memory.

By the way, after that 40-mile day with the hallucination experience, I ran 35 miles the next day in 100-degree heat -- having logged 75 miles within 36 hours. It was quite an adventure across 15 states!