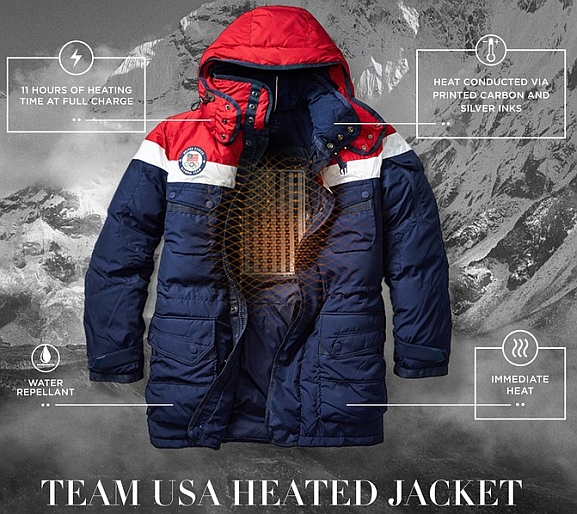 The USA Olympic athletes are going to be warm and comfortable at the 2018 Pyeongchang Olympics in Korea beginning February 9. They'll be wearing red-white-and-blue down parkas equipped with a button on a slender battery pack inside that athletes can push to get an "instant and long-lasting jolt of toasty warmth."

Designed by Ralph Lauren Corp., it's said to be the most technologically advanced jacket ever produced. Essentially, the fabric has ink that heats up!

The electronic-printed conductive inks, printed in the shape of an American flag in carbon and silver and bonded to the interior of the jackets, are flexible and stretchable. The parkas are water-repellent. The athletes can set the temperature (there are three settings) via an app on their smartphones, or manually inside the jacket. The heat can last up to five hours on the high setting and 11 hours on the low setting, fully charged. So, it's literally wired but with no wires.

The heating technology grew out of the success of the jacket that gold-medal swimmer Michael Phelps wore when he carried the flag at the Opening Ceremonies for the 2016 Summer Olympics. The "USA" on the back lit up, acting as a beacon for the team.