President Trump's "This" and "That" Exercise Regimen 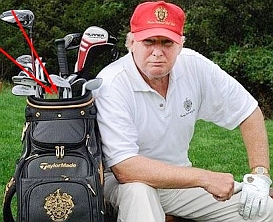 Today, an "analysis" was posted at CNN.com by Chris Cillizza (CNN Editor-at-large) about President Donald Trump's overall health. As many know, White House physician Ronny Jackson recently revealed some information concerning the President's current health. He said that the President weighs 239 pounds and could stand to lose 10 to 15 pounds over the next year (he's 6'3" tall). Dr. Jackson stated, "He's more enthusiastic about the diet part than the exercise part, but we're going to do both."

President Trump likes to eat fast food, and he doesn't like to exercise. In an interview with Reuters on Wednesday, the President tried to make the case that he actually exercises more than people know, including Dr. Jackson. President Trump said, "I get exercise. I mean I walk, I this, I that. I run over to a building next door. I get more exercise than people think."

Based on that information, here's a summary of the President's exercise regimen:
In that same Reuters interview the President said, "A lot of people go to the gym and they'll work out for two hours and all. I've seen people ... then they get their new knees when they're 55 years old and they get their new hips and they do all those things. I don't have those problems."

As CNN's Chris Cillizza reports, that's very similar to how Donald Trump described his reservations about exercise in a 2015 New York Times magazine profile. Trump said he was not following any special diet or exercise regimen for the campaign. He said, "All my friends who work out all the time, they're going for knee replacements, hip replacements -- they're a disaster."

As has been reported in the press many times, President Trump likes to golf. However, he doesn't even like to get too much exercise on the golf course -- choosing to ride in a cart rather than walk the course. He's even been seen driving his golf cart on the greens at various locations worldwide, which is a big NO NO in golfing. Seems he prefers to ride right up next to wherever the ball landed. Guess he's saving his steps for "This," and "That," and to "Run over to a building next door."