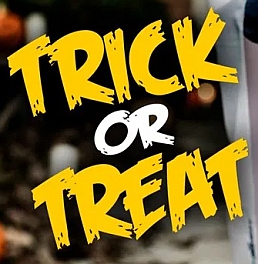 I have fond memories of Halloween evenings during my childhood years in the 1970's of going trick-or-treating around the neighborhood. I believe I stopped doing so at around the age of 12, possibly because I had my fill of sweating behind a plastic mask -- which was a common element of Halloween costumes 40 years ago. I know that back then there were not as many concerns about safety as there are today.

U.S. statistics show that approximately 41 million children will trick-or-treat this year in America, and 70 percent of parents won't accompany them. The Centers For Disease Control say that children are more than twice as likely to be hit by a car and killed on Halloween than any other day of the year, possibly due to 82 percent of costumes not having any reflective tape or other visibility aids. Also, there are over 4,000 Halloween-related injuries each year in the United States -- the most common injuries being to hands from pumpkin carving and leg and extremity injuries due to falls from long costumes and/or costumes that impair vision.

Halloween can certainly sound like a potentially hazardous time of the year, and in some ways it is. However, it can also be a FUN time that children will always remember... if their parents allow that. Sadly, about 27 percent of parents don't have their children involved in trick-or-treating, according to a survey by Safe Kids Worldwide.

You may have heard last Halloween that the city of Chesapeake, Virginia, implemented an ordinance that banned anyone 13 years and older from trick or treating. If teens were caught in costume with candy, they could be found "guilty of a misdemeanor and shall be punished by a fine of not less than $25 nor more than $100 or by confinement in jail for not more than six months or both." Clearly, the city of Chesapeake was determined to take the happy out of Halloween for teenagers in that city.

After receiving national criticism, the leaders of Chesapeake decided to revise the ordinance this year. Now, the maximum trick-or-treating age is 14 and does not allow for possible jail time. The city states that the law is in place only to prevent issues like teens stealing and smashing pumpkins.

Don't think that Virginia has the only city to ban trick-or-treating at a certain age. The same thing has happened in many municipalities in America, including some in Illinois, Mississippi, South Carolina and Maryland.

I hope that everyone has a SAFE and HAPPY Halloween this year. Turn on "It's the Great Pumpkin, Charlie Brown," have some candy, and enjoy the evening.