My Youngest Son is a Member of His University's eSports Team 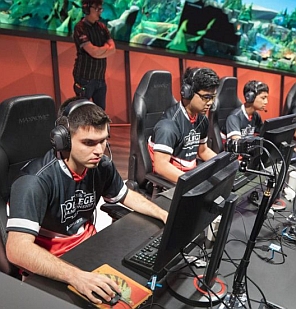 Three years ago, in 2016, I posted a writing to this blog about my youngest son being an online gamer. Today, he is only a couple of months away from his 20th birthday and attends a university. Recently, he was accepted to be on an eSports team at that university. An eSports team battles in online multiplayer games to determine a winner. My son's school is one of 175 colleges and universities which are members of The National Association of Collegiate eSports (NACE). There are over 5,000 student athletes in the NACE -- and yes, those who participate in competitive gaming are referred to as "athletes." In fact, the NACE provides over $16 million in eSports scholarships and aid to such athletes.

Earlier this year, I wrote a post about the rise in video game-related injuries, and I hope that my son doesn't experience that on his eSports team. He currently practices with his team four days per week and has competitions on Saturdays with other universities. The games that are played include: League of Legends; Overwatch; Fortnite; Apex Legends; and Rocket League. Personally, I have never played any of them. In fact, I don't play video games at all. However, it is something that my youngest college son is quite good at. In fact, multiple partial and full scholarships for his campus' eSport athletes will be available beginning in the fall of 2020. Also, his eSports team has sponsored equipment, coaches, and a new gaming arena at his university is being created.

The eSports industry has seen tremendous growth over the years both in terms of viewership and revenue. The global eSports market is expected to surge to over $1 billion this year, up $230 million from 2018 on growth in sponsorships, merchandise and ticket sales. There is currently a global eSports audience of over 450 million as fans tune in on livestreaming platforms, such as Twitch and Microsoft's Mixer. Big competitions are held in arenas where thousands of fans watch big-name professional video gamers compete for lucrative prize pools.

So, just how lucrative can it be for professional eSports teams? The recent Dota 2 eSports tournament had $34.3 million in prize money and 66 million viewers. The winning team, OG, won over $15 million in prize money, or about $3 million for each player on the team. That's more than the 2019 Wimbledon singles champions took home ($2.9 million each). Also, the Fortnite World Cup had a $30 million prize pool that is estimated to reach $40 million next year.