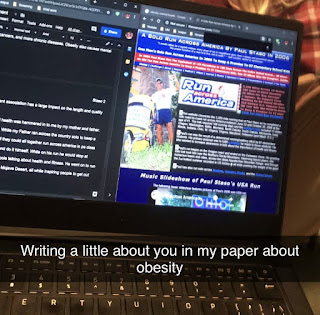 When I was a Sophomore in high school (back in 1980), the obesity rate in the U.S. for youth ages 12 to 19 was five percent. Now, about 40 years later, it is 20 percent. Yes, 20 PERCENT! American teenagers are heavier than ever and it has become such a 'norm' in our society that people are truly just accepting it as the new normal.

What about adults? Adult obesity rates now exceed 35 percent in nine states, 30 percent in 31 states, and 25 percent in 48 states. Mississippi and West Virginia have the highest adult obesity rate at 39 percent and Colorado has the lowest at 23 percent. Between 2017 and 2018, the adult obesity rate increased in Florida, Kansas, Minnesota, Missouri, New Mexico, New York, and Utah, it decreased in Alaska, and remained stable in the rest of states and in Washington D.C.

Yesterday, one of my sons -- who is in attendance at a university -- sent me a text to tell me that he was writing a paper about obesity and that he was including information about me and my ultra-endurance running endeavors to promote youth health and fitness. It's nice to know that my son remembers what I did many years ago when he was between the ages of 6 and 11.

I have written countless times in this blog about America's (and the world's) obesity problem. Unfortunately, things are not getting better. I'm proud of my son for writing about the topic in one of his university classes. It's going to take young people talking more about it in order to turn things around. I'm in my mid-50s and I can often see the eyes of young people glaze over when I start to talk about America's obesity issue. However, younger voices stand a greater chance of actually being listened to. So, let's go young people! Get talking about it, and then get to changing it!