Why Are Runners More Likely To Be Successful in Life? 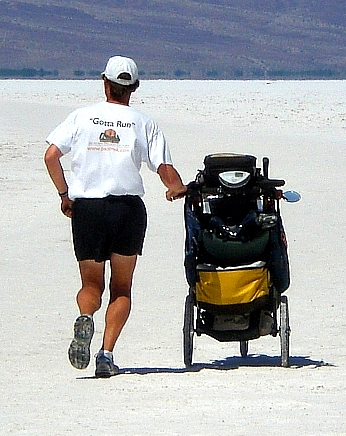 Peteni Kuzwayo is a Christian, marathoner, ultra-marathoner, and editor of Run For Wealth -- a blog established with the mission of helping people "run a fulfilling life race." The blog publishes content that promotes living an abundant and balanced life. Mr. Peteni has run over 30 Marathons, 15 Ultra-marathons and 4 Comrades Marathons.

In an article titled 11 Reasons Why Runners Are More Likely To Be Successful, Mr. Peteni states that running yields success, and his definition of success is living a fulfilling and balanced life. He outlines the reasons why runners are likely to be successful, based on his own experiences.

Since my running career was in ultra-endurance running across states and countries solo without any support crew and completely self reliant by pushing a stroller loaded with gear, food and water... I don't believe that all of Mr. Peteni's "reasons" apply to me as a runner. However, I believe that for the general populace of runners there are some things to be gleaned from his words. In a nutshell, these are his 11 reasons why runners are likely to successful in life.

4. They are highly disciplined
Training for a long distance event – marathons and longer – requires self-discipline. It takes months of consistency, sacrifice and effort, all of which hinge on this one vital characteristic called self-discipline.

5. They know how to overcome obstacles
During training, runners will go through periods of injuries, illness and fatigue – physically and mentally. In extreme events, runners experience grueling obstacles. From the crazy distances to tough weather conditions, runners have to endure challenges that bring out the best in them.

6. They are patient
Runners value process. In a world of short-cuts and manipulation, runners understand that the best way to get success is through patience. Patience builds life endurance in you. Patience teaches you humility.

8. They build networks
Because of the nature of long distance running, you are able to spend hours on the road, interacting with others. Through this interaction, relationships are built. Through relationship building, intricate networks are built – all of which can be ingredients to success.

9. They budget
Runners have numerous events in a year, and some include travelling and accommodations. As a result, they are forced to budget in advance to avoid the increased costs of last minute bookings. Budgeting is essential to life success.

Success is not an automatic process. It requires a certain type of mindset. It also requires a particular lifestyle that is built of productive habits. Running is a wonderful sporting discipline that builds characteristics in you that cannot be manipulated.

I retired from a lifetime of running a few years ago, reaching a point in my early 50's of having ultimately acquired what I wanted from the sport and valuing far more where I'm at and the healthy mindset I maintain daily. My faith, family and fabulous wife are now the only "successes" I need in life. Running the equivalent of over twice around planet earth did indeed embed into me habits that are essential for being successful. However, I no longer feel the need to pound my body into the ground in order to try and run from or to run toward anything in my life.