Federal Board Recommends Mandatory Bike Helmet Laws in All States

The following chart shows the main reasons that bicyclists are dying in increasing numbers on American roadways (up from 806 in 2017 to 857 in 2018). Bike fatality rates have risen steadily since 2009. 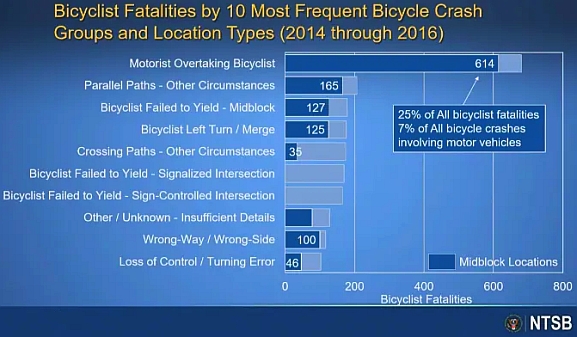 Recently, the federal safety board issued a recommendation for mandatory bike helmet laws in all 50 states. The National Transportation Safety Board voted 3-0 to recommend helmet laws even as staff members reminded panelists that such laws may reduce overall cycling, and lead to the “unintended consequence” of more road fatalities because fewer cyclists will mean less pressure on local officials to build the kind of protected infrastructure that is said to improve cyclist safety.

The next step is for the Federal Highway Administration to act on the recommendation that mandatory bicycle helmet laws be enacted in all 50 states.