My Son, Kyler, is Pursuing His Dream of a Career in the Music Industry 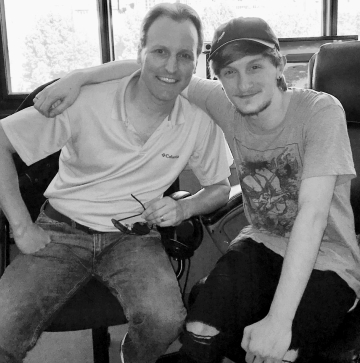 This past summer, my wife and three step daughters had an opportunity to travel out of state to visit my eldest son, Kyler, and learn more about the music production and recording school he is attending. We had a great time and I got to play guitar in a sound studio for the first time in my life.

Kyler got into mixing music in his teen years and also started to write instrumental pieces, which he made available online for download. You might say that I'm bias, but I believe he is quite gifted in music writing, mixing, recording and production. I'll never forget walking into the studio at his school and looking at the sound board. To me, it looked like a control panel on a 747 jet!

Kyler is in his early 20's and definitely has an ear for music. It has been a passion of his for nearly 10 years. He's even teaching himself how to play the guitar.

Recently, the Recording Industry Association of America reported that music revenues grew 18 percent (to $5.4 billion) in the first half of 2019. Paid streaming services added more than 1 million new subscriptions a month -- meaning that there are now more than 60 million total paid subscriptions. Thanks to that rapid growth, plus continued modest drops in digital downloads and physical sales, streaming now generates 80 percent of music business revenues and has truly reshaped how fans find, share and listen to the songs and artists they enjoy.

Online engagement around music and musical artists powers much of the popularity of many social media and technology platforms, and musicians are among the most followed users on social media. In the United States, there are more than 157,000 music-related businesses and nearly 2 million jobs in the music industry. Twenty percent of a major label's roster of artists are signed fresh each year.

Kyler has made it his goal to pursue a career in the music industry. I believe he'll succeed at doing that!