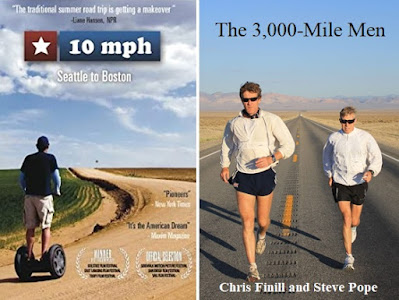 There are two documentaries available on YouTube that I really like and today I want to share those with you. The first is "10 MPH" and is a nationally-acclaimed documentary that follows two guys (Josh Caldwell and Hunter Weeks) who leave their cubicle jobs in corporate America in order to cross the United States on a Segway -- one of those human transport contraptions that is a gyroscope-balanced two-wheel scooter. The documentary is available on YouTube (nearly 1 million views!) and also on Amazon Prime, and Hunter Weeks not only directed this documentary but also another one that I've previously written about... Ride The Divide.

The premise of 10 MPH hinges on two friends who decide to travel from Seattle to Boston at 10 mph on a Segway in an attempt to change their lives forever. What results is a 100-day trek across America's back roads where they meet many interesting people, and their journey occurred in 2004 -- two years before I ran solo across the USA. The combination of the stories, the scenery and the music in 10 MPH makes this documentary one that is worth 90 minutes of your time.

The other documentary that I want to share with you is "The 3,000-Mile Men". It is the story of two British men (Chris Finill and Steve Pope) who run across America. Their adventure occurred in 2011 -- five years after I finished my coast-to-coast run. This nearly two-hour documentary, directed by Ben J. Southern, shows you America at an even slower pace than the 10 MPH documentary. You'll see what struggles these two men had to overcome in order to run from the Pacific Ocean to the Atlantic Ocean. When the run was over, Chris Finill was asked how he tackled the distance each day. He said, "You have to eat the elephant in bite-sized chunks and think today we're going to run from x to y." Yep... that's how you do it!

With summer behind us and the cooler months ahead, pour yourself a cup of coffee (or some hot chocolate), put your feet up, and check out these documentaries!