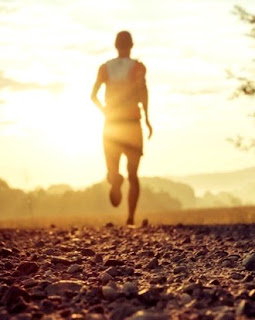 In the 1980's and early 1990's, I would have times during my training when I would get up at 4:00 a.m. and run 10 to 12 miles before 6:00 a.m. -- and then eat a well-deserved breakfast. I enjoyed running on the roads before the rest of the community was awake. It was quiet, usually cooler, and was a nice start to the day. I was pretty motivated in my running back then and didn't really struggle with rolling out of bed and putting on my running gear. It was then that I was covering the half-marathon distance (13 miles) in around 80 minutes -- or at about a 6-minute per mile pace. However, when training I typically kept my early-morning runs to around 6 miles per hour.

I usually ran with a hydration belt around my waist, having water handy as well as some PowerBars, banana, and other on-the-go fuel. When I did those early morning runs, I lived in Montana and when the colder months would come I would typically wait until the warmer afternoon hours to log my miles. The other day, I was driving to the office and noticed a lone runner logging his early-morning miles. It made me recall many mornings of doing the same thing. Now, before you begin to think that I'm missing those 4:00 a.m. alarm bells to get up and out the door, I can tell you that it has been about 30 years since I did that. Even when I trained in my 40's to run across states and countries I logged most of my miles in the afternoon. No, I don't miss pounding my body into the pavement to start the day.

Here's what some experts say can be gained from an early morning run:

However, there are also some cons that may come from running early in the morning. The core body temperature remains low during morning, which means that your muscles are stiff, your power output is low, and you are more vulnerable to injuries. Both your oxygen intake and outflow are low, and this can affect your breathing capacity. Your blood pressure is also higher. People are most vulnerable to heart attacks and strokes in the morning.

Honestly, I enjoyed the long distances I ran before the sun came up. Even when I ran solo across America I would typically be on the road by 7 a.m., and when I had a 40+ mile day with the temperature expected to reach 90+ degrees, I would often get on the road at around 5:30 a.m. The earliest I hit the road during my coast-to-coast run was 3:45 a.m. when I was facing a 45-mile, 100-degree day with windy conditions.