10-Day Battle With Iliotibial Band Syndrome in Oregon and Washington 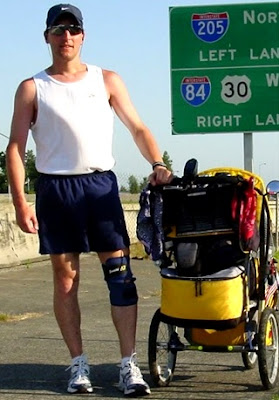 During my 2006 run across America, I had to wear knee brace-compression sleeve for about a week on my left leg early on in the 3,260-mile journey. I began the run on the Oregon coast and for the last few days in Oregon, and the first few days in Washington state, I had to wear the brace to help with an inflamed Iliotibial band at my left knee. Running such extreme distances requires knowledge on how to handle and manage pain, and it was certainly painful for about a week. However, I was able to maintain my targeted daily mileage and with a nightly icing routine -- and a slightly slower pace -- I was able to remedy the situation within 10 days.

Iliotibial band syndrome occurs when the connective tissue (ligament) extending from the pelvic bone to the shinbone becomes so tight that it rubs against the thighbone. Distance runners are especially susceptible to it. The main symptom is pain between the hip and knees that typically worsens with activity. Essentially, the problem is friction where the Iliotibial band crosses over your knee. A fluid-filled sac, called a bursa, normally helps the band glide smoothly over your knee as you bend and straighten your leg. However, if the band is too tight, bending your knee creates friction. The Iliotibial band and the bursa can both start to swell, which leads to the pain.

My 10-day battle with it was a result of substantial downhill running (Oregon's Cascade Mountain Range) and running only on one side of the road -- facing traffic for safety, but my left leg was on the lowest part of the slope. Because roads slope toward the curb, my outside foot was always lower -- which tilts the hips and throws the body off alignment. When you look at some of the early pictures from that 108-day run, you'll see me wearing the brace. Click here to check out the photos.