Tim Bamforth Does Not Have The Stroller I Pushed Across America 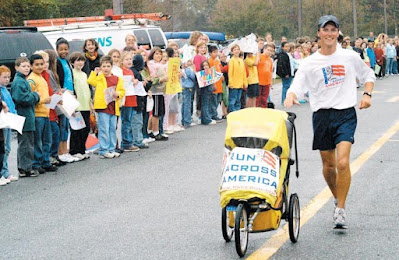 Today, I read an article in the Delaware Cape Gazette that contained some details about my coast-to-coast run... and some inaccurate information. You can read that article by clicking here. It was written by Tim Bamforth, a Lewes, Delaware resident who voluntarily assisted with some housing and final day logistics for my 2006 solo run across America. It has been about 12 years since he and I were in communication -- until today. In today's original article, Bamforth stated: "...he averaged 30 miles a day pushing an 80-pound stroller named Bob. I still have Bob. Paul gave it to me as a keepsake of the challenge." That is NOT true! The Bob stroller that I pushed across America in 2006 (and as shown in the accompanying photo) is the same one that I pushed across Montana in 2008; Alaska in 2009; Germany in 2010; and the Mojave Desert in 2011. In fact, click this link to read about the stroller being in my attic! I made a written request to have the article corrected, and the online version was indeed corrected. However, the print version is floating around Delaware today. It even included a wrong website address. The website for my running adventures is www.theusarunner.com. If you'd like to see my B.O.B. stroller in action, click on any of the links below -- which will take you to online photo albums from my running adventures:
In all honesty, there are times when I really wish that I wouldn't have made that promise and run across America in 2006. Over the past 14 years I've seen inaccurate and/or misleading information -- and sometimes direct lies -- about my 3,260-mile, 15-state run from the Pacific to the Atlantic. I personally paid thousands of dollars to do that run -- to keep a promise I had made to 97 elementary children -- and missed an entire summer with my four children, who are now adults and live hundreds (and in some cases, thousands) of miles away from me. In fact, only one of the school children that I kept that promise to has communicated with me since the 2006 run -- and the last contact was nearly 9 years ago.

For 108 days I hurt, bled and cried my way across the country. No fame or riches came from it, and none was sought. There are no documentaries about it, no books dedicated to it, and no awards as a result of completing it. I simply ran to keep my word, and I nearly died 7 times in the process. Was it all truly worth it? There are days when I really wonder. Regardless, I still have BOB... that stroller I got in May 2006 and pushed across the United States, Montana, Alaska, Germany, and the Mojave Desert. Its wheels are pretty worn -- similar to my legs -- and now gathers dust in a dark attic. Together, that stroller and I achieved some running adventures that many said were uncommon, unfathomable and unprecedented. You won't find my name in any record books or the stroller in the Smithsonian Museum. And, I'm okay with that.

At the end of the day, a man's character boils down to his faith and his integrity. I'm determined to go to the grave with both.