Cardboard Fans Support Teams and Make Up For Some Lost Revenue 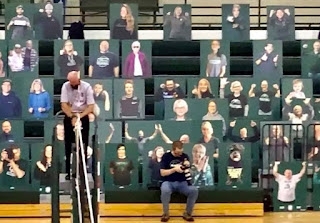 Last evening, my 27-year-old daughter coached her team in a high school volleyball match. She resides in a different state than I and it was nice to see the game streamed online. One thing I immediately noticed was the "fans" in the stands. Let's just say, they weren't moving much! Like many schools across the country, the fans were represented by cardboard images. Aside from the coaches, players, referees, live-stream team, and a photographer... the gymnasium was filled with pictures of supportive parents, students, and school administrators. Unfortunately, that has become the norm for many schools in these days of COVID-19.

Not all schools have resorted to cardboard fans. Some are allowing limited capacity in gymnasiums and stadiums -- utilizing social distancing and mask wearing. However, for those schools, universities and professional teams that have decided the fans will be represented by photos, there's certainly a cost factor. This week, Michigan State announced it will sell fans the chance to have their cutouts fill seats at upcoming football games. Costs are $75 for sideline and end zone sections, $55 for season ticket holders, and $50 for students or a pet. Yes... you read that right. A pet can have its own cutout! If fans want their cutouts after the Michigan State football season is over, there's an additional $25 shipping cost.

The Philadelphia Phillies packed its stadium with 10,000 photographs that fill most of the ballpark’s lower bowl and spots in the upper deck. Other clubs have done similar, with the cost being between $25 and $300 for each photographic representation. Some people honor a loved one who has passed away by purchasing a cutout of that person. Celebrities have purchased cutouts, as have political figures.

Selling cardboard fans could be a small way for teams to make up some lost revenue, and give fans a way to support their favorite teams from a distance. However, there are some pitfalls with printing fan-submitted photos in mass. This past summer, at a rugby game in Australia, 4,000 supporters bought cardboard cutouts -- including a prankster who uploaded an image of a prolific serial killer. No one caught it and the cutout was printed and put in the stands before the team played for a televised broadcast. The National Rugby League promised to tighten its screening process for photo uploads.