Hotel Pools/Spas Cause a Third of Pool-linked Disease Outbreaks 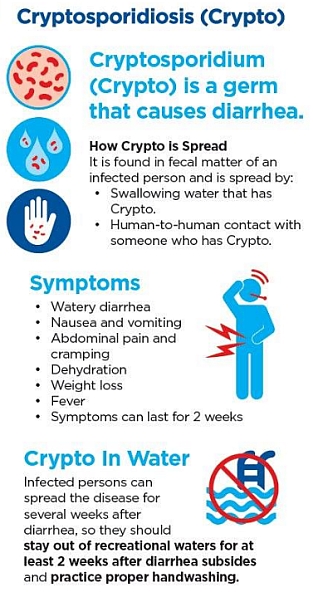 It's warming up and more people will be aiming to cool down by jumping into swimming pools. However, the Centers for Disease Control and Prevention (CDC) warns that there is a hard-to-kill germ called Cryptosporidium that can resist the chlorine disinfectant in swimming pools and is a leading cause of outbreaks linked to pools -- particularly hotel swimming pools and hot tubs. Between 2000 and 2014, one-third of the disease outbreaks were traced to hotel pools and hot tubs. There were more than 27,000 illnesses and eight people died.

Cryptosporidium is spread by a diarrheal incident — yes, you read that right — and it can be hard to see that happen in a pool full of kids. The CDC recommends that parents shouldn’t let kids go into pools if they’ve had diarrhea recently, and babies need even closer watching. If there is a diarrheal incident, the pool operator is supposed to clear the pool and flush it with extremely high levels of chlorine or bromine to kill the parasite. However, that does not always happen. Cryptosporidium infects people when they swallow contaminated pool water.

The CDC states that it is very important for people to shower and to not pee or defecate in pools. Proper showering can not only remove residual fecal matter that could get into a pool, but it takes away the oil, sweat and dirt that react with chlorine and make it less effective. The CDC states that the problem with peeing in a pool and not showering before you go into the pool is that urine and sweat and dirt combine with chlorine in the water... and that reduces the chlorine's effectiveness. The CDC reports that urine, not chlorine, in a pool is what makes people’s eyes sting after swimming.

The CDC notes that people should keep in mind that bacteria can grow into mats called biofilms, which then resist the effects of chlorine and other disinfectants. These slimy biofilms typically have to be scrubbed off.

Be smart this summer, and be safe!