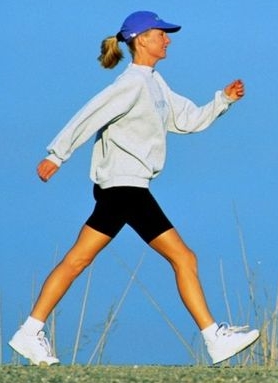 If the 2018 Spring season is measuring up like the Spring seasons of the past two years in the United States, there are 65 million Americans jogging and running as the flowers bloom, according to Statista data. For a country of 325 million people, that means that 20 percent of Americans are on the move with a jog or run. However, non-profit organization Running USA reports that running race finishers have seen a decline in recent years after hitting an all-time high in 2013. It could be that the focus of jogging and running is becoming more about personal health than racing.

Taking 10,000 steps a day is considered a healthy goal if you want to be reasonably fit and give your overall wellness a boost. But how often do you actually hit that number? According to research from Stanford University, if you're like many Americans, you're falling short. Their recent study found that people in the U.S. take an average of just 4,774 steps daily -- below the worldwide average of 4,961 steps per day. This places America at number 30 out of the 46 countries evaluated in the study.

I've spent most of my adult life as a runner, using bicycling as my preferred alternate fitness method. However, I recently purchased a new home in a beautiful, wooded neighborhood which is ideal for taking walks. My soon-to-be wife, Kelley, and I plan on regularly taking walks through our neighborhood as a supplement to our fitness efforts.

Walking improves fitness, cardiac health, alleviates depression and fatigue, improves mood, creates less stress on joints and reduces pain, can prevent weight gain, reduce risk for cancer and chronic disease, improve endurance, circulation, and posture, and the list goes on! Research has shown that the energy used for moderate-intensity walking and vigorous-intensity running resulted in similar reductions in risk for high blood pressure, high cholesterol, diabetes and heart disease. Essentially, when it comes to some pretty prominent markers of our health, walking at a moderate intensity can get the job done just as well as running, as long as you’re expending the same amount of energy. Past studies have supported this notion, finding that a daily walk can reduce the risk of stroke in both men and women, reduce the days spent in a hospital each year and can even lower your risk of death by up to 39 percent (when compared with no leisure-time physical activity).

A study published in the British Journal of Sports Medicine found that those who adhered to a walking program showed significant improvements in blood pressure, slowing of resting heart rate, reduction of body fat and body weight, reduced cholesterol, improved depression scores with better quality of life, and increased measures of endurance. However, pedestrian accidents and deaths are on the rise in the U.S. and it's important for walkers, joggers and runners to be alert when on the edge of a roadway.

The new Governors Highway Safety Association report estimates that 5,984 pedestrians were killed in the U.S. in 2017. According to the report, there are increasing signs that both walkers and drivers are dangerously distracted. Although reasons for the recent rise have not been scientifically determined, experts suspect that smartphones and marijuana use are key factors in the deadly trend. In the seven states that have legalized marijuana for recreational purposes, pedestrian deaths spiked 16.4% in the first half of 2017. At the same time, deaths in other states fell 5.8%.

So, if you're going to take up a walking, jogging or running routine, be safe out there -- particularly after sunset. About 75% of pedestrian fatalities occur at night.