"Wouldn't Common Sense Tell You Not To Do That?!" 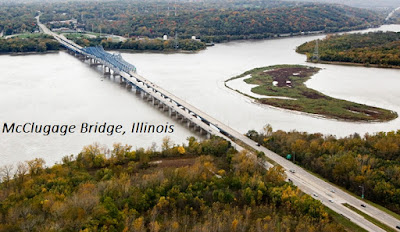 Björn Suneson, of Sweden, is currently running solo across America, heading from east to west. While he was in the state of New York, he opted to run on a freeway bridge spanning Chautauqua Lake, a bridge that did not allow for pedestrian traffic. As a result, a state police officer gave him a ticket for the infraction. Björn wrote about the incident in his blog and is quite right when he states, "Bridges across big rivers or lakes are maybe the worst things a coast to coast runner can come across. They are either dangerously narrow or you are not allowed to run across them." His recent police encounter reminded me of an encounter I had with a police officer after crossing a bridge in Peoria, Illinois, during my solo run across America in 2006.

I had spent an evening in Peoria and loaded up my stroller the following morning to set off on U.S. Route 150 (a divided highway) heading east. Shortly after setting out that morning I encountered the McClugage Bridge -- located north of downtown Peoria. The bridge spans Lake Peoria and is nearly one mile long. I was facing traffic and there were three lanes on the westbound span. There was about 8 inches of shoulder and most of the support stroller was overlapping one of the lanes as I hugged the far left of the bridge heading east. Traffic was heavy due to the morning commute. I had to keep my eyes on the back left wheel of the stroller in order to keep it as close to the concrete side as I could. At one point I glanced up just in time to see a motor home's side mirror coming straight at my head at around 50 miles per hour. I barely ducked in time to avoid being struck.

It was a dangerous crossing! Before venturing onto the bridge I had seriously thought about whether or not to try it. I actually watched the traffic for about 30 minutes before deciding that I would go for it. From what I could see, there was no other way across Lake Peoria -- and of course I didn't have a support vehicle. 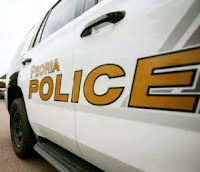 As I crossed, I received some angry horn honks from motorists, likely trying to get to their jobs and annoyed by the guy pushing the yellow stroller across McClugage Bridge with a "Run Across America" sign on the front. Regardless, I pressed on and avoided the vehicles the best that I could -- some by only a few inches. The bridge crests at the middle and I could then see down the other side. What I saw was a police vehicle sitting there with its lights on, waiting for me. I ran off the bridge and approached the officer -- who was leaning against the hood of his car with his arms crossed, shaking his head. I said, "Good morning!"... with a smile. He looked at me like I was some sort of lunatic.

The officer said, "Son, do you realize that pedestrians aren't allowed on that bridge?" I responded by saying that I didn't see any signs stating that pedestrians couldn't cross it. He shook his head, looked me up and down, and said, "Wouldn't common sense tell you not to do that?!" I smiled and said, "I guess if I had common sense I wouldn't have started this run in the first place!" We both chuckled, and he let me run on without issuing a ticket. He told me to be safe, and wished me luck. I've never received any ticket from police while running across states and countries.