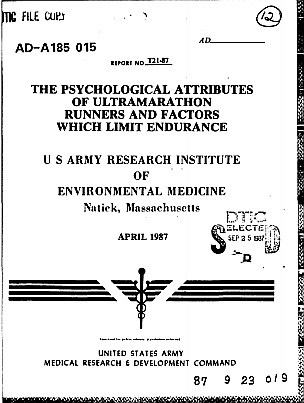 I was recently doing some online reading about psychology studies of ultra-endurance athletes and came across an April 1987 report (T21-87) by the U.S. Army Research Institute of Environmental Medicine -- Natick, Massachusetts, titled The Psychological Attributes of Ultramarathon Runners and Factors which Limit Endurance. The study focused on the psychological and training characteristics of 44 ultra-marathoners competing in a 50-mile trail race. The psychological and training variables were used to distinguish differences between "survivors" (finishers) and "casualties" (non-finishers) in the race and to predict race time. In addition, mood changes and runners' physical symptoms were examined to assess changes from pre to post-race. Distribution and availability of the report is noted as being "approved for public release." The authors are noted as W.J. Tharion; T.M. Rauch; S.R. Strowman; and, B.L. Shikitt.

I found it interesting to see that that time frame of the study was from April 1986 through May 1987. In September 1986 I embarked on my first attempt to run across America with the aim being to set a new world record at approximately 68 miles per day, so it intrigued me to see that this study was done during that time. The subjects consisted of 44 registered entrants (42 males and 2 females) of the Massanutten Mountain Massacre 50-mile trail run who volunteered to participate in the study. All subjects were instructed to read and sign a volunteer agreement of informed consent. The 50-mile trail run was completed by 22 of the 61 race entrants. The study found that ultra-marathoners who finished the race weighed less, ran faster in training, and aspired to run a faster time for the race in contrast to non-finishers.


The tactical importance of a soldier's ability to move as quickly as possible over a variety of terrain is critical in certain military maneuvers. Air assault, light infantry and special forces may require the soldier to navigate cross country for a sustained period of 72 hours or more. The physical and psychological demands of these types of military operations are similar to competitive endurance events such as 50 and 100 mile trail runs. These trail racing ultramarathoners, like dismounted soldiers, must often traverse distances up to 100 miles over wet and rocky terrain in temperatures ranging from below freezing to above 100 degrees fahrenheit. Reports of sprains, lacerations, excessive weight loss and hypothermia are common during races as are complaints of hallucinations and paranoia. The importance that psychological factors play in this type of endeavor cannot be underestimated. Since the ultramarathoner and dismounted soldier must persevere at a physically demanding task for an extended period of time, his psychological state can be expected to have a profound impact on endurance performance.

In the April 1987 report, it is written that there were significant differences found between finishers and non-finishers on the confidence-in-finishing scale (finishers scored higher) and finishers had run longer distances in previous races. The study did not find a major difference in training mileage between finishers and non-finishers, although finishers were found to train at a significantly faster pace. The findings also show that predicted finish time was significantly lower for those who actually finished the race and could indicate that finishers had greater confidence in their ability. The findings also indicate that previous ultramarathon experience seemed to be related to the ability to finish an ultramarathon. Analysis of post-race symptomatology showed the most intense symptoms focused on muscular fatigue.

The study noted that it's important to identify moods and symptoms that predict success at finishing an ultramarathon since once identified, runners focus attention on those feelings or symptoms and avoid those that deter from successful performance. The April 1987 study notes previous research which showed that elite distance runners avoided pain zones by monitoring sensory input and adjusting their pace. These associative techniques were used by elite athletes as opposed to disassociative ones ("e.g. sing to oneself, daydreaming pleasant fantasies, etc."), which were reported as being more predominant in slower runners. The study concluded that by using associative techniques on those symptoms and moods that contribute to success one would expect better performances. The report stated:


The findings of the present study are of significance to the U.S. Army in that comparisons between the ultramarathon and a sustained military operation show many similarities. Sustained military operations require physical exertion for a prolonged period of up to 72 hours. Recommendations made to the ultrarunning community are also relevant to the military. Learning to manage stress, utilizing the most advantageous training techniques, and the employment of goal-setting strategies are important to enhance human performance. The athlete and the soldier must appreciate the efficacy of cognition on physical performance. Contemporary training strategies must consider an interdisciplinary approach emphasizing both physiological and psychological parameters.