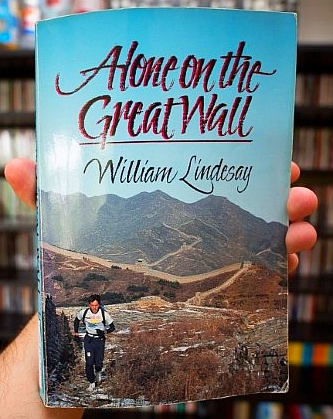 There's a book on a shelf in my home office titled, "Alone on the Great Wall" -- written by William Lindesay, a man who has always had a deep fascination for the Great Wall of China. A long-distance runner in his native England, Lindesay set out to run 1,500 miles on the Great Wall.

Lindesay was drawn to make the grueling run because it was "the last great adventure opportunity in the modern world."  He set off in 1986  from the Western part of the wall in Gansu province at the JiaYuGuan Pass from where he would run his way all the way to the East.

The trip was full of trouble and mishap due to bad planning, sickness and the inevitable bureaucracy of China in the eighties. His foreign appearance, and tallness, made him stand out in a China that had very few foreign visitors at the time. Lindesay attracted a lot of attention while running the wall. Local villagers started noticing him and eventually police came to investigate his motive behind the run. He explained and showed his love for the wall, but in vain. He got arrested several times and at some point had to leave the country for awhile.

Lindesay didn't give up and kept going back to China. His persistence eventually paid off and he completed the journey. When all was said and done, it took him more than two years, on and off, to cover the entire distance on foot. At that time, China’s Xinhua News Agency described it as “the most successful foreign exploration of the Great Wall” and Lindesay was heralded a hero. He was awarded the "Friendship Honorary" by the State Administration of Foreign Experts Affairs in China. He also received the "Order of the British Empire" and was decorated by the British Queen Elizabeth II, honoring his effort.

During his journey, Lindesay kept a diary which formed the basis for the book he released in 1991. The book portrays a great appreciation for the people of China and their history. From the soldiers of the imperial frontier; the merchants of the Silk road; and the peasant farmers who wrote messages of encouragement in his diary, Lindesay came to know many people of China who extended a hand of friendship. It is a well-written and entertaining book that should appeal to runners, who vicariously will share Lindesay's experiences. By my last look, the book is available at some online outlets.