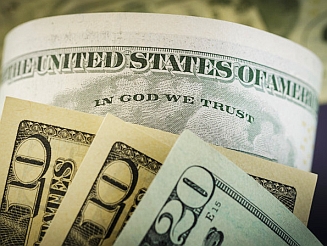 "In God We Trust" is the official motto of the United States of America. It was adopted as the United States' motto in 1956 and first appeared on the two-cent piece in 1864. A law passed in a Joint Resolution by the 84th Congress, and approved by President Dwight Eisenhower, on July 30, 1956, declared "In God We Trust" must appear on American currency. This phrase was first used on paper money in 1957, when it appeared on the one-dollar silver certificate. Also, the 84th Congress passed legislation, signed by President Eisenhower in 1956, declaring the phrase to be the national motto. In 2006, on the 50th anniversary of its adoption, the Senate reaffirmed "In God We Trust" as the official national motto of the United States of America.

Some groups and people have expressed objections to the use of "In God We Trust" on currency, citing its religious reference violates the Establishment Clause of the First Amendment. These groups believe the phrase should be removed from currency and public property. In lawsuits, this argument has been unable to overcome the interpretational doctrine of accommodationism, which allows government to endorse religious establishments as long as they are all treated equally. According to a joint poll by USA Today, CNN, and Gallup, 90% of Americans support the inscription "In God We Trust" on U.S. currency.

In Judaism and Christianity, the official motto "In God We Trust" is not found verbatim in any verses from the Bible, but very closely in Psalm 91:2, "I will say of the LORD, He is my refuge and my fortress: my God; in him will I trust." However, how many Americans are walking around with currency in their pocket bearing the words "In God We Trust" and they don't actually trust and/or believe in God? Last year, a Pew Research report found that 10 percent of Americans don't ascribe to a higher power at all, and 33 percent believe in some sort of higher power or spiritual force. Finally, 56 percent of the American people still believe in God "as described in the Bible.

I reside in Indiana, and earlier this month Indiana senator Dennis Kruse introduced a bill seeking to place a poster reading “In God We Trust” in every public and charter school classroom in Indiana. The bill, titled “Education Matters,” specifies that the phrase should appear on a “durable poster or framed picture” that is at least 11 by 17 inches, and that the display could potentially be purchased with school funds. This year, Alaska, Kentucky, Missouri and South Carolina have already introduced “In God We Trust” bills that would allow the phrase to be placed on public buildings and vehicles.