The Chaplain's Closet and the Symbolic Shoes of Sacrifice 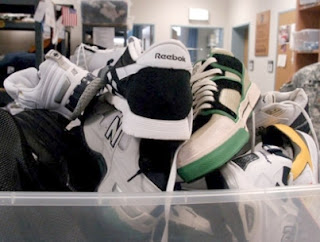 Nine years ago I did a 500-mile, 19-day solo run across Germany after being invited to do so by the U.S. Department of Defense Dependents Schools. I ran from Grafenwoehr (in Eastern Bavaria) to Landstuhl (in the district of Kaiserslautern). After completing the run, I was invited to visit the Landstuhl Regional Medical Center (LRMC) -- a military hospital operated by the United States Army and the Department of Defense. LRMC is the largest military hospital outside the continental United States and serves as the nearest treatment center for wounded soldiers coming from Iraq and Afghanistan. In addition, it serves military personnel stationed in the European Union as well as their family members.

As I saw wounded warriors and the personnel assisting them, I was truly struck by the sacrifice of our military men and women. I was escorted to the "Chaplain's Closet," which is a part of the Landstuhl Hospital Care Project -- a non-profit organization that provides comfort and relief items for military members who become sick, injured, or wounded from service in the Middle East. The Chaplain's Closet allows all in-patients, out-patients, LRMC liaisons, LRMC nurses, and medical escorts access to supplies. The purpose of the program is to enhance the morale and welfare of troops and veterans by contributing quality of life items.

While at the Chaplain's Closet, I inquired about two shoe bins bearing the labels "left" and "right." I learned that the bulk of the shoes have no mate because the other is being used by someone who has lost a limb. The bins were placed in the Chaplain’s Closet late in 2005, when the hospital had an influx of soldiers injured by roadside bombs in Iraq. Every single shoe in the bins represents someone’s life that has been dramatically altered.

I will never forget looking at those bins of single shoes after having just run solo across Germany on two strong legs. It quickly made me realize that what I had accomplished greatly paled in comparison to what our country's military personnel accomplish each and every day for all Americans. I left the Chaplain's Closet with tears in my eyes, and gratitude in my heart, as I took one last look back at the symbolic shoes of sacrifice.